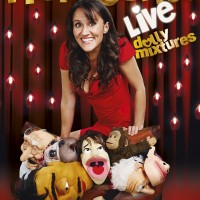 As Christmas approaches, an abundance of stand-up comedy DVDs hit the shelves and it can be tough to know where to start.

If you’re after something a little different to the usual standing on stage and telling jokes, then Nina Conti’s “Dolly Mixtures” is the DVD for you.

There is no denying that Nina is a very talented ventriloquist – as a skill alone – she is amazing. Not just because her lips don’t move, but because of the flawless way she switches between her own voice and that of her characters. Their conversations feel very very, and she really does makes it seem effortless. Thankfully, she is just as funny as she is talented.

Introducing herself as the world’s fourth best ventriloquist, Nina kicks off the show with Monk the monkey. It’s brilliant to witness a very polite and ladylike Nina chatting with the audience, offset with this very cheeky monkey who says exactly what he thinks. I think we’d all like to have the ability to say whatever we wanted, unfiltered, to people, via a monkey we could blame it on.

We also meet Nina’s daughter/inner child, who performs a song that is absolutely brilliant, her misunderstood dog and her clairvoyant granny.

One of my favourite moments of the show was when Nina brought out Stefan, her dishy Polish builder. The show is heavy with audience participation, and Stefan was a life-sized puppet that required a member of the audience to get inside him to help work his arms of legs. As the volunteer helps Nina and Stefan act out a scene together, the outcome is absolutely hilarious.

Another wonderful moment of audience participation came in the form of Nina’s masks, that she uses to hijack other people’s bodies, to use them as puppets. It’s very clever, the way Nina tailors the words she puts in their mouths based on their body language.

Even though they’re not the most realistic looking puppets (they’re not supposed to be) the way Nina brings them to life with their movements and expressions is borderline creepy. Creepy but brilliant.

Filming a live DVD is bound to be tough, but any time I thought Nina was slipping up, like getting tongue-tied or getting her Grandma’s bag tangled, it was so funny and so well handled I could be easily convinced it was intentional.

“Nina Conti Live – Dolly Mixtures”, which includes over 40 minutes of exclusive extras, is available to own on DVD on 24th November and available on Digital Download on 3rd November 2014.