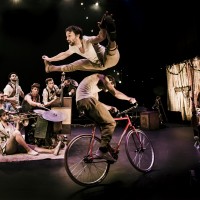 There are few shows that will have you teetering on the edge of your seat, watching with as much fear as adoration in your eyes, more than Scotch and Soda, the centrepiece of Edinburgh Christmas’ 2014 festivities.

Performed by a small cast of talented acrobats from Australia, accompanied by The Crusty Suitcase Band (led by Ben Walsh), the show is a grungy yet strikingly professional circus show. The four acrobats, Daniel Catlow, David Carberry, Mozes and Chelsea McGuffin, seem to defy human nature by performing every one of their risky, death-defying stunts with such ease that you’d be forgiven for assuming there was some kind of trickery involved, if the venue wasn’t so intimate. Sitting inches away from the stage as Mozes dangles from the ceiling, supported by nothing but one Achilles tendon, it’s impossible not to be unnerved by the absence of any harnesses or safety nets. Of course, this vulnerability adds to the mesmerising nature of the show and provokes the audience to breathe a sigh of relief each time they complete a stunt without injury.

The hour-long show lacks a strong narrative thread and is almost completely speech-free yet each performer has their time to shine and show off their personality to the audience. A particularly impressive scene involving a bicycle encapsulates the meaning of teamwork, with the performers putting an impressive amount of faith and trust into each other’s abilities.
Scotch and Soda fills a gap in the market for a festive show that’s devoid of any references to Santa Claus or Widow Twankey– the circus is officially back in town!

Scotch and Soda runs at the Paradiso Spiegeltent in St Andrew Square, Edinburgh until 21st December 2014. For tickets or more information, click here.