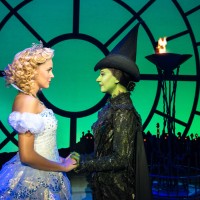 Forget about dreaming of a white Christmas – this year is all about the colour green thanks to the arrival of the smash-hit musical Wicked in Edinburgh.

Based on the book by Gregory Maguire, Wicked is a spin-off of L. Frank Baum’s The Wizard of Oz which concentrates on the previously untold stories of the story’s two witches, Elphaba and Glinda. Told from their perspectives, the musical delves into their enchanting pasts to sensationally reveal how they first met and how one became so sweet whilst the other allegedly turned so evil.

Revisiting a classic to tell another side of the story is an interesting concept that works surprisingly well. The show is an enlightening exploration of good versus evil, prejudice and diversity which will leave fans of Oz elated by its revelatory nature and newcomers desperate to discover what they’ve been missing out on.

Local actress Ashleigh Gray stunned in the lead role, portraying Elphaba’s misunderstood and exploited character to such perfection that the audience couldn’t help but find themselves audibly rooting for her throughout. Vocally, Gray had no problem filling the black shoes once worn by beloved stage stars including Idina Menzell and Kerry Ellis, whilst her gutsy rendition of the show’s signature song, Defying Gravity, provoked the audience to give her a well-deserved standing ovation before the curtain had even fallen on the first act.

Emily Tierney turned in an equally magnificent performance as Glinda the Good, delivering some of the most humorous lines with admirable comedic timing. The actress, who also portrayed Glinda when Andrew Lloyd Webber’s production of the Wizard of Oz opened in the West End in 2011, has a beautiful soprano voice which worked particularly well when used during songs designed to showcase the characters more sweet and vulnerable side.

Wicked has been seen by in excess of 44 million people worldwide and has won over 100 international awards yet this is first time Scottish fans have been able to see it performed on home soil. With so many touring shows subject to condensed sets and special effects, it’s a testament to the show’s producers that the touring version of Wicked managed to be as big a spectacle as its West End and Broadway counterparts.

With such a magical script, cast and score, Wicked looks set to cast its spell over everyone that’s lucky enough to get a ticket to see it in Edinburgh!

Wicked runs at The Edinburgh Playhouse until Saturday 10th January, 2015. For more information, or to book tickets, please visit http://www.atgtickets.com/venues/edinburgh-playhouse/