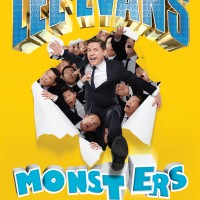 The original superstar of comedy, record breaking comedian Lee Evans is back with MONSTERS, the biggest stand up tour to hit arenas this year. Recorded live in Birmingham, Lee is at his majestic best in front of a packed house during his five sold-out nights at the National Indoor Arena. With his amazing energy and killer routines, Lee has the audience in stitches from start to finish. Out now (Universal Pictures UK), ‘MONSTERS’ is the latest DVD unleashed by the undisputed King of Comedy. It’s so good it’s frightening!

Having played to over a staggering two million fans throughout his five UK arena tours since 2002, this new landmark entertainment event will again provide the ultimate Lee Evans experience to home audiences. ‘MONSTERS’ features Lee’s usual exasperation with the infuriating frustrations of everyday life combined with his boundless energy and unique physicality, which his legions of fans have come to expect and love. It’s the must-have DVD this Christmas for any comedy fan.

‘MONSTERS’ sees Lee a little bit older, but definitely no wiser, as he takes audiences on his personal journey of modern day life and its’ daily irritations. From his hilarious take on the ‘selfie’ phenomenon to imitating the characteristics of a rescue dog. Witness exactly what bugs him about getting older (he won’t be playing golf anytime soon) and the numerous ways he attempts to keep his long-suffering wife happy doing rubbish household chores. Lee tackles it all with his boundless energy and uproarious punch-lines.

In typical Lee style ‘MONSTERS’ ends with a showstopper of a finale with a personal musical number dedicated to the most important thing in his life … ‘the Missus’.

to buy a copy, or check out our Twitter for info on how to win one (UK only).