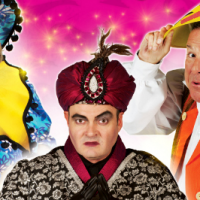 Pantoland’s dream team (made up of local veteran entertainers Allan Stewart, Grant Stott and Andy Gray) are back at the King’s Theatre with Aladdin, their latest family-friendly festive offering.

This version of the classic fairy-tale about the ordinary boy who falls in love with the privileged Princess Jasmine is set in Peking, China despite the non-stop references to and jokes about the city in which the show is being staged. As always, this panto has it all: sla
pstick comedy, extravagant costumes, upbeat songs, crowd interaction and several genuine laugh-out-loud moments.
Allan Stewart’s over-the-top portrayal of Aladdin’s Mum, Widow Twankey, is spot-on whilst Grant Stott shines Abanazar, the evil baddie who is intent on stealing both Princess Jasmine and the magic lamp from Aladdin (Greg Barrowman). Stewart has admirable comedic timing and has no problem eliciting laughter from the audience. The chemistry between the three leads is infectious and you are left with the distinct impression that they are having as much fun performing the show as the audience are having watching it.

As popular as the variety trio are, putting on a pantomime with the same cast members year after year is no easy feat. The majority of the audience will return annually, making it essential for the writers and producers to constantly find fresh, new ways to impress them without losing any of magic that made the shows work in the first place. This year, a myriad of insanely impressive stunts and special effects have been brought in and they are guaranteed to leave both the youngest and oldest members of the audience absolutely mesmerised.

Get ready to embrace the silly season – it is Christmas, after all!

Aladdin runs at the King’s Theatre in Edinburgh until Sunday, 18th January. For tickets or more information, click here.