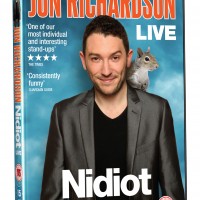 Jon Richardson is checking his tyre pressures, hoovering his floor mats and putting an emergency packed lunch in the boot of his car, ready to hit the stage again with his brand new DVD – JON RICHARDSON ‘NIDIOT’ LIVE.

The show was filmed at a sold out Hammersmith Apollo, and is the second DVD release from one of the UK’s brightest and most popular stand-up comedy and TV stars.

The Lancashire-born comedian always has us in stitches during his various TV appearances (including his regular slot on 8 Out of 10 Cats), so we were eager to check out his live show.

The former perennial singleton and OCD sufferer just has this adorable charm to him, and without Jon even really trying he had us eating out of the palm of his throughly-washed hand before he’d so much as cracked his first joke.

Jon has a bit of a reputation for being… sort-of miserable, so if that’s the kind of material you usually enjoy from the comedian, then his revelation early on in the show that he is happy might have you worried. Jon seems to have realised that he can be happy and funny, and it’s a winning combination. From ducking out of wild nights out to wanking in the woods (what a beautiful picture I’m painting for you), he has some fantastically hilarious stories to tell.

The confidently frank way he tells his tales, regardless of often embarrassing outcomes, make them even more enjoyable to listen to, and his self-deprecation only serves to endear him to us even more.

Not only is Jon’s rehearsed and polished material brilliant, but his unplanned interactions with the audience are equally as funny.

Jon Richardson – ‘Nidiot’ Live is out now to own on DVD and Blu-ray, released by Universal Pictures (UK)​. Also available on digital download​​​.​​