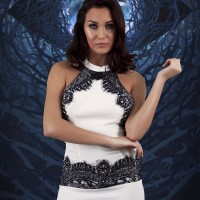 Chloe Goodman is the first celebrity to be evicted from the Celebrity Big Brother House.

She left the house to a mixed reaction from the crowd.

Emma asked her if she was hurt that she was the first out and Chloe remarked that it was ‘brutal’ and said that she had done what she needed to in the house.

Emma then asked Chloe if she was relieved to be out of the house and she answered: ‘Every year you see people in the house wanting to leave but not one person in there is enjoying themselves.’

She commented that she was proud that Alexander had kept his cool with Perez and added that Perez was ‘the biggest wind up merchant’ she had ever met.

She went on to say that Katie Hopkins is amazing and called her a ‘wonderful lady’.

Emma then asked her about the incident with Jeremy that concluded with him being kicked out of the Celebrity Big Brother house and Chloe said that she bounced back and was determined not to let it affect her but she couldn’t have done that without the strong characters in the house.

Emma then commented that the house became quite a female dominated place and that Chloe had bonded with a certain young lady – cut to VT of Chloe and Cami Li. Chloe said: ‘My Girl!’

Emma asked why they got on so well and Chloe said: ‘She’s so down to earth and a strong woman.’ She added that she wasn’t worried for Cami Li as Michelle and Patsy will look after her and that she would love to see her in the final.

Emma commented that Chloe, Cami Li, Michelle and Katie had garnered the label, ‘The Mean Girls’, Chloe said that what they said was right and that it was always how the house felt.

Emma asked her why it was alright not to sit on the fence and Chloe said it was a fair enough question. Chloe explained that it caused cross-communication in the house and that it was important to let people know when they were in the wrong.

Emma asked why they didn’t just ignore Perez as he feeds off the attention and Chloe said that she had ignored ninety percent of it.