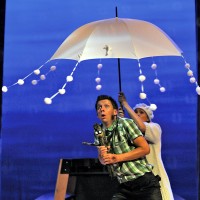 Scamp Theatre’s production of Stick Man, the loved story about a Stick Man whose life is thrown into turmoil when ends up in a river and must find his way back to his Stick Lady Love and three children in time for Christmas, is as clever as it is imaginative. Based on the popular book by Julia Donaldson and directed by Sally Cookson, the show (which has taken up temporary residence at The Spiegeltent as part of Edinburgh’s Christmas festivities) is understated yet utterly captivating from start to finish.

Throughout the hour-long performance, the cast of three flawlessly sketch out a number of imaginative scenes without ever letting their lack of a big-budget ruin the magic of theatre. Nick Howden turns in a particularly impressive performance in the title role, using mime to somehow perfectly take on the physicality of a stick. From twirling umbrellas as snow to swirling ribbons representing wind, the props are imaginative enough to provoke thought from the young audience – something that is often lacking in modern-day children’s plays.

Energetic interactive scenes involving a boisterous dog chasing Stick Man around the theatre and a game of catch with a beach ball make the show fun and engaging for children of all ages whilst the plethora of catchy new songs add charm to the production.

Stick Man runs at the Spiegeltent in Edinburgh until Sunday 4th January. For tickets or more information,
click here.