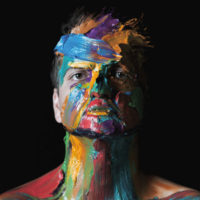 Fyfe has today premiered the video for forthcoming single ‘Solace’, which you can watch here. The new treatment emerges ahead of the release of his much-anticipated debut album, ‘Control’, out March 9 via Believe Recordings, following support across Radio 1 – Zane Lowe, Huw Stephens, Annie Mac, Phil & Alice – 6Music and XFM- alongside Hype Machine no.1s for every track to date. Having previously supported SOHN plus a string of sold-out shows as part of Communion’s New Faces tour, Fyfe will play an eight date headline tour through March & April 2015, including London Electrowerkz on March 25.

The video for ‘Solace’ is an interplay of sorts with Fyfe’s artwork to date (all created by the artist Sophie Derrick) which sees Fyfe turned- via the application of paint to his face- into living art. Speaking about the treatment, director Daniel Brereton says; ‘I wanted to match the simplicity and strength of the track within the imagery, and so we see Fyfe perform whilst coated in the paint that Sophie applies. Slowly the process is reversed and we reveal more of Fyfe under the paint. I thought that this kind of idea would be a good way to introduce the music and the person behind it to the audience.’

‘Control’ is a collection of brooding, expertly-crafted alternative pop songs, from an artist and producer who has already earned fans as diverse as London Grammar to Childish Gambino (plus over 2 million Soundcloud plays). For 25-year-old Paul Dixon, it’s a record which may have started as an exercise in tightening one’s grip on life, but is effectively about release, and learning that control itself is a fallacy. A prodigal young talent, Fyfe’s childhood was spent playing in youth orchestras, before his older brother ordered that he listen to cooler music and gave him a Logic set-up. Whilst studying Economics at university, Fyfe shifted away from his classical schooling – though a quietly symphonic grandeur still characterises ‘Control’ – to writing his own songs under the alias of David’s Lyre. Suddenly the two worlds collided and something had to give: halfway through his course he dropped out and signed to Mercury Records. Despite a wave of acclaim, Dixon became stuck within the major label infrastructure, lost momentum, and ended up right back where he started- though this time around, things were going to be different.

It was the appropriately-isolated sounds of ‘Solace’ which formed the blueprint of ‘Control’. Primarily a meditation on depression, Dixon emailed ‘Solace’ and just a picture of the back of his paint-streaked head by way of biography to a dozen music sites: without a PR, manager or any label in place, he watched it morph into one of the most-blogged hits of the year. Written and entirely self-produced by Fyfe, subsequent album ‘Control’ feels as inspired by the 90s hip-hop beats of Dixon’s childhood as the delicate pop of The XX, via the swelling orchestral arrangements of Bjork’s ‘Volta’: all held together by Fyfe’s near-falsetto vocal croon.