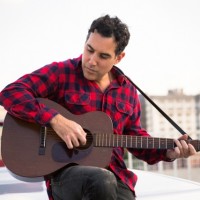 American singer-songwriter Joshua Radin is set to return to the UK for two exclusive gigs in London and Glasgow next month.

The popular folk-rock singer, who is  from Ohio, will perform at the Oran Mor in Glasgow and KOKO in London as part of his 2015 European tour.

Joshua, who shot to fame in the UK in 2008 with his single I’d Rather Be With You, was inspired to write his new album (Onward and Sideways) whilst spending the day in a Stockholm hotel room. The album, which is Joshua’s sixth, artfully and honestly captures the experience of falling completely and utterly in love, with all the joy, hesitancy, exhilaration,fear and doubt it entails. Released in January, it also features a duet with country starlet Sheryl Crow.

Tickets for the shows, which take place on Tuesday 21st April (Glasgow) and Wednesday 22nd April (London), are on sale now. Fans will also have the option to purchase VIP tickets, which will enable them to meet Joshua in person and watch his soundcheck. Fans will also be given a signed copy of Onward and Sideways.