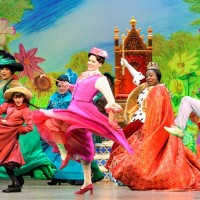 Mary Poppins is set to fly into Edinburgh for a magical stint at The Festival Theatre next Spring.

The award-winning stage adaptation of the beloved story about the world’s favourite nanny arriving on Cherry Tree Lane will arrive in Edinburgh on 27 April and run until 18 May.

Featuring a host of unforgettable songs such as Jolly Holiday, Step in Time, Feed the Birds and Supercalifragilisticexpialidocious, the show is set to be a hit with all the family. Mary Poppins has already enjoyed successful runs on Broadway and in the West End, as well as touring internationally.

General sale for Walt Disney and Cameron Mackintosh’s Mary Poppins opens on 4 May 2015. Tickets can be purchased from www.edtheatres.com