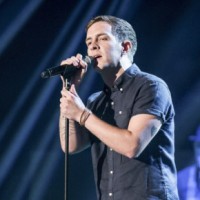 It’s been one helluva week for Scotland’s Stevie McCrorie – as well as triumphing to victory in the final of The Voice, he’s also seen his debut single shoot to the top of the charts and his name added to the lineup for T in the Park 2015.
Stevie, who is from Alva, is sure to receive a hero’s welcome when he takes to stage at the festival on Saturday, 11th July. However, it’s not the first time the firefighter has taken to the stage at Scotland’s most famous festival…he first performed on the T Break stage in 2010 with MOPP after entering Tennent’s Lager’s unsigned talent competition.
Stevie said: “Growing up in Scotland, I dreamed of being able to play T in the Park, there’s always been something magical about the festival to me since I was a teenager…to return to the festival this year as a solo artist is going to be really special.”
Geoff Ellis, Director of T in the Park, added: “Stevie is an incredible talent – he’s no stranger to music fans in Scotland though, having gigged for years as MOPP ans also Stevie and the Moon, so his return to T in the Park is sure to be a very special moment for him and for those in the crowd.”
Stevie is the latest act to be added to the 2015 line-up and will join a host of bands and artists to welcome T in the Park to its new home at Strathallan Castle such as Kasabian, The Libertines, Aviccii, Noel Gallagher’s High Flying Birds, Sam Smith, The Script and Stereophonics at the festival.
Full line-up details and tickets are available now at www.tinthepark.com or by calling 08444 999 990.