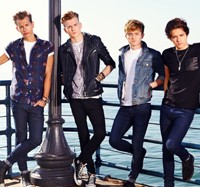 Multi-platinum band The Vamps are set to follow in the footsteps of Tom Jones, P!nk and Blondie by performing a gig at Edinburgh Castle this summer.

The popular foursome, who have sold over two million singles and had five top ten hits in the UK charts, will perform a one-off gig in Edinburgh on Saturday, 18th July.

The band are the latest headliners to be added to the Castle Concerts 2015, joining Lionel Richie and Boyzone, who will perform on Wednesday 22nd July and Satuday 25th July respectively.

Tickets for the show are set to go on sale at 9am on Saturday, 18th April and can be purchased from www.ticketmaster.co.uk