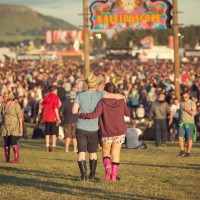 It’s the news Scottish music fans have spent the past year patiently waiting for…T in the Park 2015 is officially going ahead!

Councillors have finally given the three-day extravaganza the green-light following months of uncertainty after wildlife groups raised concerns about the festival’s move to Strathallan Castle in Perthshire.

Organisers were forced to find a new home for the event after safety concerns were after an underground pipeline was found at Balado, near Kinross.