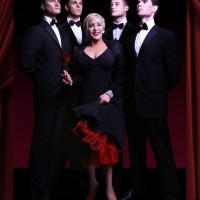 Throughout her short life, Judy Garland found herself defined in equal parts as one of the most engaging stars the world has ever seen and a cautionary tale of success and all its fallouts. But The Songbook of Judy Garland, a brand new stage show about her life and career, succeeds in shifting the focus firmly back onto her talent.

Starring Lorna Luft alongside West End dynamite Louise Dearman and former X Factor star Ray Quinn, the show cleverly combines live performances with video transmissions of Garland in her heyday. It’s an odd concept, but one that worked surprisingly well and seemed to delight the diehards in the audience.

Vocally, Dearman’s performance can’t be faulted – she completely held her own during a thundering duet with Luft meant to emulate a melody originally made famous by Garland and Barbara Streisand. It’s a shame the same can’t be said for Quinn, whose voice lacked the power and character needed to evade being constantly outshone by the show’s leading ladies. However, he didn’t put a foot wrong when it came to the choreography and blended in perfectly with The Boyfriends, a six-piece dance troupe who were utterly fabulous.

Luft herself was on fine form throughout, powering her way through some of Garland’s most renowned songs and sharing touching anecdotes about her Mother. Whilst her stories were interesting to listen to, her delivery came across, at times, as over-rehearsed and insincere. However, being able to listen to a funny tale about a night the pair spent conjuring up mischief in the The Savoy Hotel justified the ticket price alone and reminded the audience that to her, Garland wasn’t a huge star – she was simply ‘Mum’.