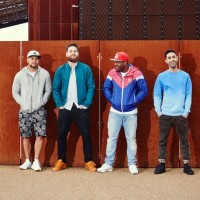 As the arena gates opened, yesterday marked the start of a new era for T in the Park. Thousands of fans descended upon Strathallan Castle to welcome the music festival to its new home and watch the likes of Sam Smith, David Guetta, Kasabian, Mark Ronson and Fatboy Slim take to the stage.

“The site is definitely cool, but what makes T in the Park distinctive is the people that come here and the vibe” – Gary Jarman, The Cribs

Whilst indie-rockers The Cribs were impressed with the festival’s new home, they were even more impressed by the notoriously loud Scottish crowds. Frontman Gary Jarman said: “This is our sixth time at T in the Park. When we first started playing Scotland, the guy who booked us said we were almost like a Scottish band and there’s nothing more flattering to us than that.

“The thing is, T in the Park is more about the audience than it is about the site. The site is definitely cool, but what makes T in the Park distinctive is the people that come here and the vibe. It’s all about the crowd in Scotland.”

Prides made T in the Park history when they became the first band to ever play the Main Stage at the festival’s new site. The Scottish band marked the occasion by releasing their new album, Higher Love, on the same day. Singer Stewart Brock said: “When we got the word through that we were going to be the first band on the Main Stage at the new site, we were proper, proper chuffed. It’s like being a little slice if history at the festival that we’ve all been at so many times. T in the Park feels like our home turf, so it’s nice to be a part of it and we love the new site.”

“The first year we played T was probably the loudest crowd we’ve ever played to!” – Kesi Dryden, Rudimental

Rudimental were one of the first bands to get the party started on Friday evening, with keyboardist Amir Amor commenting: “There are so many different levels of music here – bands who are just starting all the way through to bands that have been around for years and years.”

Drummer Kesi Dryden added: “The first year we played T was probably the loudest crowd we’ve ever played to.”

“It feels magical with a castle” – Louie, Hector Bizerk

Hector Bizerk, an experimental group from Glasgow, were lucky enough to headline the Transmissions Stage on Friday night, after spending three years climbing up the bill. Louie said: “You play T in the Park and it’s a really good footing – especially internationally, when you’re going to play in Europe and America. It gives your agent some clout – here’s this band who’ve played this big festival in Scotland with a huge crowd. It makes you feel like an authentic band.

“Glastonbury and Reading/Leeds now have tents for emerging act but I think the idea started here, more than 20 years ago. This new site looks great – it’s a lot easier to access and everything seems a lot closer and it feels magical with a castle!”

For more information on T in the Park, please visit www.tinthepark.com