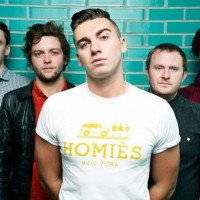 The rain might have refused to stop falling but nothing was going to dampen spirits as T in the Park got going on Saturday. Festival veterans Twin Atlantic joined The Libertines, The Script and George Ezra on the bill and we were lucky enough to grab a chat with some of the acts about their time at Scotland’s largest music festival…

“It’s absolute madness that we get to headline any stage here” – Sam McTrusty, T in the Park

There’s something magical about watching a band go from performing on the T Break Stage to headlining the massive Radio 1 Stage and we were proud to see Twin Atlantic do just that on Saturday (we’d be surprised if they’re not headlining the Main Stage next year!) For frontman Sam McTrusty, it was an incredibly proud moment: “It’s absolute madness that we get to headline any stage here, it’s an absolute honour, but for it to be Saturday night on the Radio 1 Stage is just unreal. It’s so emotional because you’ve made this festival feel like a second home for us. It’s because of you we feel we belong.”

“This site feels like a new chapter for T in the Park, and long may it continue” – Charlie Reid, The Proclaimers

It might have been their sixth time performing at T in the Park but The Proclaimers managed to draw their biggest crowd yet when hundreds of patriotic music fans packed out the King Tut’s Wah Wah Tent to see them perform the likes of Sunshine on Leith and, of course, I’m Gonna Be (500 Miles).

Charlie Reid said: “There’s something about T in the Park – it feels more youthful than all the other festivals. V Festival is a bit older and Glastonbury has a lot of older folk but T does seem younger – that gives it an energy.

“This new site feels like a new chapter for T in the Park, and long may it continue!”

Brother Craig added: “We’re busier than ever this summer and our live show has been getting bigger and bigger. This is our sixth time at T in the Park and it’s unique: it’s so specifically Scottish, and we’re so identified with Scotland, so it’s great to come and play here.

“We’ve come from literally the smallest stage at T in the Park to the biggest” – Kerr Okan, The LaFontaines

The LaFontaines were tasked with opening up the Main Stage on a day – a huge honour for a band that got their start on the T Break Stage. Vocalist Kerr Okan commented: “We’ve literally come from the smallest stage at T in the Park to the biggest. We’ve built ourselves up over four years and today was a bucket list moment for our band and it was something we embraced and enjoyed.”

“Playing on the T Break Stage was probably the thing that started snowballing The LaFontaines. We were the first unsigned band to close the tent because it reached capacity and I remember things growing for us from that.”

For more information on T in the Park, please visit www.tinthepark.com