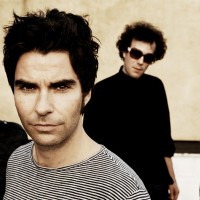 Whilst everyone has memories of enjoying T in the Park at Balado, there was something quite exciting about the festival’s move to Strathallan Castle this year. We found out what some of the artists had to say about the new site and why Scottish fans will always be the loudest…

“Our best time here? I think it was in 1999, when we did Performance & Cocktails” – Kelly Jones, Stereophonics

It’s hard to believe it’s been almost 20 years since Stereophonics first performed at T in the Park. Lead singer Kelly Jones said: “The crowds have always been great – and it’s a young crowd as well, so it keeps moving…Some people will have been following us since 1996 and there will be younger people who think our new single C’est La Vie is our first single – as long as you keep those younger people interested, they will keep asking you back.

“It’s nice to have an ongoing relationship with T in the Park and this new site looks lovely. I went up to the Main Stage when James Bay was on, looked out, and it looked like people were having a good time…it’s good that fans can hope from stage to stage here.”

The Welsh singer added: “Our best time here? I think it was 1999, when we did Performance & Cocktails. It was proper hammering down with rain but didn’t dampen anybody’s spirits – I remember looking out and that were just jumping up and down and it was amazing. That’s when we realised we’re a festival band. So we’ll keep doing what we’re doing and hopefully we’ll be back next year!”

Bassist Richard Jones added: “You do some festivals that are so nondescript you don’t remember anything about them. That couldn’t happen at T…but at a festival you’ve got to give the crowd something so they can respond. That always happens in Scotland: you do something and they go mental, so you go mental. It’s just like that. Brilliant!”

“It’s the best festival in the world” – Kyle Falconer, The View

On Sunday afternoon, The View might have made a triumphant return to T in the Park’s Main Stage but front-man Kyle Falconer was spotted enjoying the festival as a punter over the course of the weekend. He said: “This is our ninth appearance at T in the Park and this new site is cool -it’s a bit different. The atmosphere at T in the Park is always special – it’s just brilliant. I went out yesterday for a wander and everywhere you go, even at the VIP bar, everyone is dancing. Even if there’s nothing on they’re all still having a part – it’s the best festival in the world.”

“Festivals should be about introducing people to new music” – Simon Mitchell, Young Guns

Rock band Young Guns might be used to headlining their own tours, but their slot on the T Break stage gave them the opportunity to introduce their music to a brand new audience. Bassist Simon Mitchell explained: “For us as a rock band, it’s really cool to come to a music festival that caters for all different genres of music. We listen to all sorts of different music so, for us as fans of music, T in the Park is a fantastic opportunity to see a bunch of acts that we might not otherwise see. Festivals should be about introducing people to new music.”

What did you think of the first T in the Park at Strathallan? Leave us a comment or Tweet us @FleckingRecords using the hashtag #TITP2015