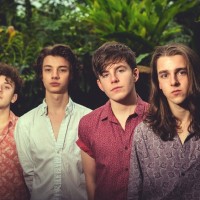 Model Aeroplanes were still in high school when they first went to T in the Park. Their classmates might have thought they were joking when they told them they’d be performing the next year, but it’s the Dundee-based band that’ll be left laughing when they perform at Scotland’s largest music festival for the third time in a row.

Ahead of their eagerly anticipated performance on the Transmission Stage tomorrow, we caught up with bassist Ben Buist to talk festivals, drunken mistakes and what their younger selves would think of their success…

Model Aeroplanes seem to be constantly on the road can often be found performing in intimate gig venues. How do you adapt your live shows for festival audiences?

It’s strange…at festivals you set up, load on stage, play then you’re off again so you don’t really have time to adapt to your surroundings and stand back to realise how cool it is like you can at headline shows. When rehearsing for festivals, we have to really hammer the set as everything has to so well-timed whereas you have a little bit more space to play about with at venues. That’s what makes festivals fun, though!

You’re set to play the Transmissions Stage at T in the Park tomorrow. What’s your favourite memory of attending the festival over the years?
We all attended T prior to playing and totally loved it so it was a dream of ours to be an artist there. The memories that stick in my head are of a 16-year-old Rory getting so messed up that he tried to break his own arm and Grant sliding through some very questionable ‘mud’ during the downpour in 2012. These are definitely the only memories that are ‘public-friendly’ so you’ll have to guess the rest on your own!

You all met whilst attending high school. What did your classmates/former classmates think when you first performed at T in the Park?

When we were at T in 2012, we all joked to the people we were in school with that we would be playing next year. They shunned us a little but, as it happened we were so I imagine it was a bit of a shock for everyone involved. We were the creative rejects in a very sport-orientated school, but a lot of familiar faces from Monifieth High have been spotted at our gigs over the last few years!

Tomorrow you’ll play T for the third consecutive year. How does it feel to be on the bill again?

Bizarre – we don’t really know how this keeps happening. When we started playing covers together at 14, we couldn’t have imagined playing it once, never mind three times. The younger versions of us are still doing backflips.

Who are you most looking forward to seeing perform?
We’re really into Everything Everything right now as their new album is immense. Of course, there’s the likes of Rae Morris, Saint Raymond and Prides we’ll at, then old favourites The View…the list goes on and on. There are also a few pals of ours over from Canada, The Beaches, who are playing the same stage as us on Friday so it’ll be really cool to catch up with them.

What do you consider to be the peak of your career so far?

We have literally had so many opportunities given to us up to now that we still can’t believe half of them. Touring with Little Comets and Twin Atlantic, who were childhood favourites of ours, was incredible.

However, after attending T in the Park as punters for years, having played to packed out tents twice now, it’s insane for us to get our heads round. It’s going to be so strange to get to experience that again!

Finally, what’s next for Model Aeroplanes?

Shows, shows and shows…we really want to keep building the family but we are aiming to release more material soon, too!

You can catch Model Aeroplanes on the (BBC Introducing) Transmissions Stage at T in the Park at 9pm on Friday, 10th July. For more information, please visit http://www.modelaeroplan.es/