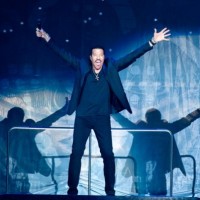 Back in the early 70s, a buttery-voiced soul star with a penchant for old showbiz grandeur emerged and quickly stole the hearts of millions of youngsters worldwide.

Those very youngsters might now be fully-fledged grown-ups with accompanying stresses but, as soon Lionel Richie took to the stage in Edinburgh last night, all mundane thoughts of everyday life were swiftly put aside and replaced with a communal desire to take part in a joyful, non-stop sing-a-long.

Richie kicked off proceedings with an energetic performance of his 1983 hit Running With The Night, giving the audience an early taste of the hit-filled concert they were about to enjoy. Velvety smooth renditions of Easy and Ballerina Girl followed, along with the boogie-inducing All Night Long and Dancing on the Ceiling, proving that Richie is one of the few 70s survivors that can still perform a classic set without coming across as a formulaic has-been.

When he wasn’t belting out hits from his multi-decade-spanning back catalogue, the charismatic veteran charmed the crowd by chatting about everything from the infamous Scottish weather to the fact that Diana Ross consistently refuses to join him on tour. “You be Diana and I’ll be…me,” he laughed, before launching into Endless Love.

Accompanied by a slick backing band and impressive visuals on the big screen behind him, the well-drilled show wouldn’t look out of place on the Las Vegas strip. However, the classic nature of the songs meant it was equally as suited to the spectacular setting of Edinburgh Castle.

Despite having shared the stage with some of the world’s greatest stars – Michael Jackson, Stevie Wonder and Bob Dylan, to name a few –  Richie was more than happy to embrace the opportunity to perform alongside a local choir for his closing number. Accompanied by a group of children from the Edinburgh Playhouse Stage Experience, the superstar brought the evening to a triumphant close with a short and sweet version of We Are the World.

Thirty years on from its release, the song came across as more relevant than ever – proving that Richie’s 45 years in the industry have been very well spent.