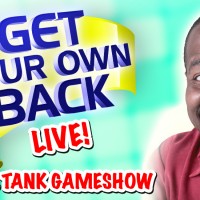 With less than a fortnight to go until The Edinburgh Festival Fringe kicks off, we’ve been trawling the programme to find out which shows you don’t want to miss. First up, here’s our list of Top Shows for Children…

Get Your Own Back: Live!

If you grew up in the Nineties, then we’re sure you’ll share our excitement over the fact that Get Your Own Back: Live! is set to make its debut at the Edinburgh Fringe Festival.

The cult CBBC programme, which saw children take revenge on their teachers and family members by dunking them in a gunge tank, was a staple of our afterschool routine and we can’t wait to see it brought to life at the Fringe by original host Dave Benson.

Gruffalos, Ladybirds and Other Beasts – With Julia Donaldson

As one of Britain’s best-selling authors, there are few children who haven’t been enchanted by at least one of the mystical creatures created by Julia Donaldson.

The writer is set to spend August acting out scenes from many of her most popular stories, including The Gruffalo and Room on the Broom, accompanied by her husband Malcolm on guitar. After each show, children will have the opportunity to get their books signed by Julia.

Gruffalos, Ladybirds and Other Beasts – With Julia Donaldson runs at the Underbelly (George Square) from 6th – 31st August (no show on 19th). Tickets cost £10 (£9 for concessions)

It might still be summer but TaleGate Theatre are already hoping to get audience members in the festive spirit when they bring their hilarious adaption of Nicholas Allan’s Father Christmas Needs a Wee to the Fringe.

The musical, which is suitable for all ages, tells the tale of what happens when Father Christmas realises he needs the toilet whilst in the middle of delivering presents to children on Christmas Eve.

The Tiger Who Came To Tea

David Wood OBE, the writer and director behind many stage hits including Fantastic Mr Fox, the BFG, The Witches and Babe the Sheep Pig, has adapted yet another classic children’s book.

The Tiger Who Came to Tea, based on the well-loved picture book by Judith Kerr, will be given its debut at the Edinburgh Fringe Festival and is recommended for those aged 3+.

The Tiger Who Came to Teat runs at The Pleasance Courtyard 6th – 31st August (no shows on 8th August). Tickets cost £11 (£10 for concessions).

Seussical, the quirkiest musical around, is set to be bring some colour and energy to the 2015 Edinburgh Fringe Festival.

Based on the imaginative books by Dr Seuss, the show features a host of well-loved characters including the Cat in the Hat, Horton the Elephant and Gertrude McFuzz. Fun for all the family!

Little Red Riding Hood is the latest Fringe show staged by Edinburgh-based Nosense Productions, who are also the group behind the Hairy Maclary Show.

If you grew up watching Morph, and let’s face it – who didn’t?! – then you’re not going to want to miss this unique model making workshop.

The class, which teaches participants how to mould their own clay version of the iconic character, will be taken by an expert Aardman modelmaker and is suitable for those aged 5 and older.

One of the world’s most enchanting tales will be brought to life by the award-winning Tread the Boards this summer.

The theatre company, which was established in 2009 and won the Barclay’s Arts Organisation of the Year Award 2014, will take up residency in theSpace with their adaption of Peter Pan. Not to be missed!

She’s a princess and she farts…what more do you need to know?

Based on the hugely popular children’s book, this show is set to leave little ones giggling away as they watch Princess Pumpalot try her best to protect Wiffyville Castle from Low-Flying Gnomes. It’s been a huge success in previous years so make sure you get your tickets early!

Cat in the Hat

One of the most popular children’s shows from last year’s Edinburgh Fringe Festival is set to make a triumphant return to the Pleasance Courtyard next month.

The Cat in the Hat tells the story of two young children who are bored because the rain is forcing them to stay indoors and find something to do. Their boredom is short-lived as, upon hearing of their unhappiness, an eccentric talking cat comes to pay them a visit and, in turn, manages to wreak havoc in their home.