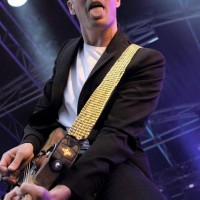 This weekend, Party at the Palace made a triumphant return to Linlithgow Loch with a line-up that was almost as Scottish as Irn-Bru.

From the market stalls to the staff, the event had a real ‘local’ feel to it – making it appropriate that the onus fell on Scotland’s very own Apache Darling to get the party started on Saturday. After winning the Battle of the Bands competition at Linlithgow Cross the night before, the Glasgow-based electro-pop duo pulled out all the stops to put on a storming set that’s likely to have won them a legion of new fans.

Next up was 100 Fables, who continued the electro-pop trend, followed by pop-rockers Little Eye, who turned in a crowd-pleasing set that concluded with an energetic performance of Prepare to Land that was reminiscent of early Twin Atlantic gigs.

The crowd had grown considerably by the time Horse took to the stage to entertain the masses with her powerful voice and impressive song-writing skills. Her soothing tone provided the perfect soundtrack to the magnificent surroundings of Linlithgow Palace, whilst her between-song banter endeared her to the audience.

Despite the fact that Del Amitri’s Justin Currie clearly didn’t get the memo that this was a family-friendly event (his swearing attracted concern from some parents) or that it was taking place in Linlithgow (“Where are we? Just outside of Edinburgh?”), he managed to win the crowd over with a stunning acoustic performance. Driving with the Brakes On attracted the biggest cheer which, although understandable, is a shame considering how underrated his more recent solo work is.

The Feeling transported the audience back to 2006 with a hit-heavy set list that featured all of their most popular jangly tunes including Fill My Little World, Never Be Lonely and I Thought It Was Over but it was a cover melody made up of several classic rock songs (including Day Tripper and Pinball Wizard) that united the crowd in song and dance. Dan Gillespie proved himself to be a charming and captivating frontman from the off, darting from one side of the stage to the other whilst demanding participation from crowd. They signed off with Love It When You Call, an upbeat and undeniably catchy song that reminded everyone of why they were temporarily one of the UK’s biggest bands.

Party at the Palace marked Travis’ only UK gig this year and the rock survivors made sure it was one to remember by playing the songs everyone came to sing along to. Highlights included Driftwood, Flowers in the Window and Sing, and as the opening chords to closing number Why Does It Always Rain On Me rang out across the loch, you’d have been hard pushed to find anyone in the audience that could disagree that Party at the Palace 2015 was a huge success.

To keep up-to-date with announcements on next year’s Party at the Palace, please visit  http://www.partyatthepalace.co.uk/