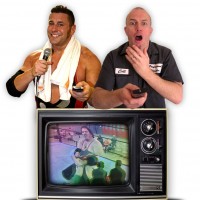 Colt Cabana, an American wrestler who moonlights as a comedian, is fusing his two talents together to create one of the most unique and unpredictable comedy shows at this year’s Fringe.

I feel I represent the spirit of the festival.  My show is truly weird and unique.  At 11pm, Brendon Burns (2007 Perrier winner) and I watch bad pro wrestling and riff over the top of it.  Each night is a different guest, different clips and a different show.

Why did you decide to bring Laughter Ever After to the Fringe?

This is my third year doing the Fringe.  I’m the only full-time wrestler to have a full run at the Fringe.  I’m a huge comedy fan so I love being inspired by all the creativity and I also love bringing the wrestling community into the comedy community.

Because there’s NO SHOW LIKE IT.  That’s not a hard sell – that’s a fact.  Wrestling is good when it’s great, but it’s the best when it’s bad!

Last year I acted as my own bouncer.  We had some drunkards in and they were being disruptive.  Since I’m a 6’1″ 245lb comedian, I got up out of my seat, and bounced them out of the show.

There’s a comedian from Canada who is the funniest man on the planet.  His name is Graham Clark and he’s doing a show called Graham Clark reads the phone book.  I couldn’t recommend him enough as a hilarious comedian.