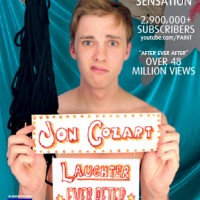 He’s attracted over 2 million subscribers on YouTube with his hilarious parody videos about Harry Potter and Disney Princesses (among others) so there’s a huge buzz about Jon Cozart’s debut Fringe Show, Laughter Ever After.

Ahead of his  run at the Edinburgh Fringe Festival,  we caught up with the online superstar for The Fringe Five…

I’m performing all my favourite songs from my YouTube channel and premièring some new work at the festival. I take the audience through the past 10 years of my life making YouTube videos.

Why did you decide to bring Laughter Ever After to the Fringe?

I’ve never done anything like a one-man show before and thought the biggest arts festival in the world would be the best place to start. Plus, I’ve never been to the UK so it’s always good to have an excuse to travel!

I can safely say there’s nothing else quite like this show. We’ve combined viral videos with live performance, and the tech is absolutely unique – not to mention I’ve spent 10 years writing this show (whether I was aware of it at the time or not!)

I’ve only been here for a few days but the first time I came to the city I was pretty overwhelmed. We don’t have anything like these castles in the states.

I’m a big fan of Broadway musicals and The Royal Conservatoire of Scotland is putting up a new production of Urinetown that’s really excellent!