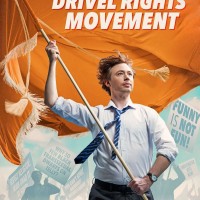 From tomorrow, Tobian Persson will take up residency at The Stand 5 & 6 in Edinburgh. Ahead of his Fringe show, we caught up with the comedian as part of our new question and answer series, The Fringe Five…

We used to fight for important things – votes for women, social and racial equality: in other words, “civil rights”. Now, we only raise our voices when the WIFI goes down on the plane ie: “drivel rights”. People have become zombies, staring at tiny screens, tripping over homeless people, on the way to buy Google glasses. People died for certain rights but we spend our days putting up photos of our dogs, giving them quirky captions saying “This morning I licked my arse” – it just feels like an insult to history.

Why did you decide to bring Tobias Persson and the Drivel Rights Movement to the Fringe?

Because I love haggis, whisky and the pouring rain!

It’s a great way of starting your day – get into a happy, revolutionary mode around lunchtime. Also, I will do some highly controversial and humanly impossible stuff in my show like try to defend Bono from U2.

Seeing the loveable madman Bob Slayer take his clothes off (that could be every other gig) at one of the Malcom Hardee Awards and try to crowd surf. A big moment for me!

Always go and see Simon Munnery – even if he is just down the pub!