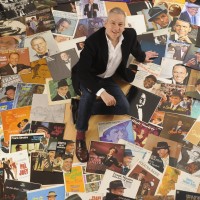 He’s impressed everyone from Sir Sean Connery to Sir Michael Parkinson with his stunning voice but Todd Gordon is now hoping to entertain Fringe audiences with a brand-new show that aims to celebrate the centenary of Frank Sinatra.

Ahead of his run at The Assembly Rooms on George Street, we caught up with Todd as part of our new Fringe Five series…

Sinatra: 100 Years marks Frank Sinatra’s centenary and celebrates the music he popularised bound together with an informal narrative with a few anecdotes. But it’s not a conventional tribute show – there’s no tipped fedora hat, nor a phoney American accent. Rather, it’s a sincere homage to the musical legacy he’s left for us to enjoy.

Why did you decide to bring Sinatra: 100 Years to the Fringe?

I did my first Fringe show in 2002 when I was just starting out as a singer. But this is the first time I’ve embarked a full 24-night run and I decided that this show would make the ideal vehicle.

A festival promoter once said to me, “The thing is, audiences leave your shows happier than when they went in!” If that became my showbiz epitaph, I’d be happy.

More seriously, the show features a selection of the greatest popular songs ever written; some well-known, and a few lesser-performed gems which audiences tend to really enjoy.

I’m not a classical music buff, however, I shall never forget Jessye Norman’s concert at the Usher Hall. I think it was way back in 1991, and the programme included Schoenberg’s Cabaret Songs. Such an amazing voice and such stage presence and, boy, could she milk an audience!

It isn’t just Sinatra’s centenary that is being celebrated this year, and Christine Bovill is performing her wonderful tribute to Edith Piaf who was also born in 1915. Her shows are in St Andrew Square Garden, also under the Assembly Rooms Fringe umbrella.