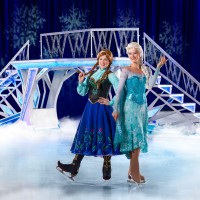 If you were to walk past Braehead Arena in Glasgow last night, you’d have been forgiven for thinking you’d wandered straight into an alternate universe, where little Princesses and friendly snowmen ruled the land.  Hurried shoppers were replaced with excitable children, all eager to watch their favourite Walt Disney movies be brought to life through Feld Entertainment’s latest Disney on Ice spectacle, Worlds of Enchantment.

Opened by Mickey and his trusty gang of ‘pals’, the show took the audience on a whirlwind trip through three of Disney’s most popular films – Toy Story 3, The Little Mermaid and Cars – before whisking them off to the winter wonderland of Arendelle for a mesmerising finale featuring all the stars of the number-one animated feature film of all time, Frozen.

The Toy Story 3 section was fun, colourful and well-executed, with the film was condensed down enough to ensure it kept the attention of all the little ones throughout. Yet it wasn’t just the kids who had a good time – a comical scene featuring Barbie raiding Ken’s wardrobe was popular amongst parents whilst The Little Mermaid section, complete with an upbeat rendition of Under The Sea by Sebastian, provoked happy, nostalgic memories.

It was obvious from the get-go that everyone was most excited to see 2013’s mega-hit Frozen brought to life. The film is practically made for an on-ice adaption and Feld Entertainment did a fantastic job at condensing it down enough to fit the logistics of a stage show without having to remove any integral parts of the story. The excitement in the arena was palpable when snow Queen Elsa appeared for the first time and it reached absolute fever-pitch when she broke into an uplifting rendition of Let It Go, resulting in an enthusiastic, arena-wide sing-a-long.

As if appearances from Disney favourites such as Elsa, Olaf, Ariel, Woody and Lightning McQueen wasn’t enough to keep the little ones captivated from start to finish, the show also featured aerial stunts, falling snow and stunning choreography.  The extensive cast glided across the ice with the type of dexterity usually only displayed by world-class Olympic champions without ever letting their bulky, heavy costumes restrict their fluid, flawless movement.

An absolute must for anyone that is partial to a sprinkling of Disney magic!

Disney on Ice, Worlds of Enchantment is currently skating across the UK. More details and tickets for the tour, which is still set to make stops in Newcastle, Manchester, Birmingham, Belfast, Dublin, Sheffield and London, can be purchased via www.disneyonice.co.uk