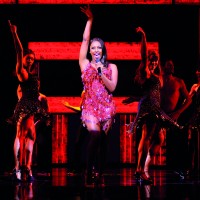 As far as modern musicals go, The Bodyguard is one of the most extravagant and downright enjoyable shows to hit Edinburgh in years.

Based on the cult 1992 film of the same name, The Bodyguard tells the story of what happens when former Secret Service agent Frank Farmer (Kevin Costner) is hired to protect superstar Rachel Marron (Whitney Houston) from a crazed stalker.

Whilst the musical does stray from the original script at times, all the best elements translate to the stage flawlessly. Slick set changes and glitzy costumes ensured it was a visual spectacle from the get-go but it was the cast, led by successful X Factor winner Alexandra Burke, that elevated the show to new heights.

Stepping into the shoes of one of the world’s most renowned vocalists is a task that would overwhelm most singers, but Burke managed to do it with the ease and confidence of a bonafide superstar. The audience was visibly stunned by her strong and soulful voice, with her rendition of I Will Always Love You having even more of an impact on them than the startling gunshot opening.

But it wasn’t just her vocals that were on fire – the pop star also used the opportunity to prove herself to be a highly promising actress.  Stuart Reid’s portrayal of the detached Frank Farmer was spot-on in early scenes but was devoid of any real warmth in the romantic scenes, resulting in a lack of chemistry between the two leads. However, he redeemed himself well with an unexpected comedic performance set in a karaoke bar that had the audience in stitches.

There’s a scene in The Bodyguard which features a group of overly-excited fans screeching their hearts out to one of Houston’s most recognisable hits. It drew huge laughs from the audience, ironically, since their fun-loving sing-a-long mirrored what was going on in the audience perfectly. A fantastic night out.

The Bodyguard runs at The Edinburgh Playhouse until Saturday, 10 October. For tickets or more information, please visit http://www.atgtickets.com/venues/edinburgh-playhouse/