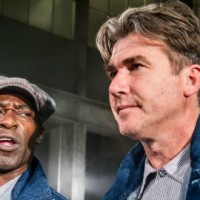 Bill Kenwright’s stage adaptation of The Shawshank Redemption might be touring to celebrate the 21st anniversary of the iconic film, but it is firmly based on Stephen King’s short novel.

Set in an unforgiving US penitentiary, the production tells the story of Andy Dufresne, a mild-mannered banker that has been handed a double life sentence for brutally murdering both his wife and her lover. He claims to be innocent and befriends fellow inmate Ellis ‘Red’ Redding, a man who has established himself as someone who can ‘get things’ from outside.

Starring Doctor’s Ian Kelsey as Andy and Casualty’s Patrick Robinson as Red, the play makes for an interesting and though-provoking watch but it isn’t quite gritty enough to be able to match the raw intensity of the cult movie.

The prison set is large and impressive, with the designers using a skilful combination of clever lighting and sound techniques to bring the rusty cellblock to life. Robinson’s portrayal of Red is fantastic, with him narrating the story in both a humorous and poignant manner throughout. Co-writer Owen O’Neill also turns in an equally noteworthy performance as untrustworthy Warden Stammas.

The production deals with all the same issues that are highlighted in the film – violence, rape, freedom and injustice – but does so in a stripped back way that doesn’t make the audience squirm uncomfortably.

The Shawshank Redemption runs at The King’s Theatre in Edinburgh until Saturday, 11 October. For tickets and more information, please visit