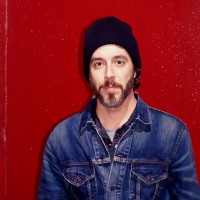 His new album may be called ‘One Hell of a Day’ but it sounds like Ryan Hamilton has had one hell of a year.

Ryan, of Smile Smile and People On Vacation fame, recently took the bold move of parting ways with his management, starting his own record label and taking his own career into his own hands.

Going it alone, planning and executing your own tour – all of these things are tough enough, but Ryan had to do it with something spectacular hanging over him: the harsh words his former management left him with.

When we caught up with Ryan for a chat at the Leeds leg of his tour, his spoke openly and frankly about everything that had gone on – not just to us, but to the audience. We’re sold this perfect image of confidence-filled, smooth frontmen with their cool rockstar persona and seemingly impenetrable shell, but with Ryan there’s an easy openness. You can relate to him. You can see him as a human and not a ‘service’ you’re paying for, which is probably because Ryan treats his fans like people and not consumers. It was refreshing to see Ryan getting openly, unashamedly emotional on stage, overwhelmed by the success of his first, full-band UK solo tour. Telling the audience how his management advised him not to go solo, with people telling him he’d be nothing without his People On Vacation band-mate and friend Jaret Reddick (Bowling For Soup) Ryan didn’t listen, and we’re so grateful for that because there is most certainly a place for his incredible music in the world and the success of this tour only goes to prove it.

We sat down with Ryan to talk about his hell of a year, his plans for the future and – as always – to quiz our current champ on his UK slang words…

This is going to start out a little like a therapy session – you’re welcome.
[laughs] Thank you.
Last year you sent out a very frank email about your battle with depression and anxiety – which is commendable. What kind of response did you get from that?
Really good and I still talk to a lot of people [who reached out]. Everything from ‘Hi, how’s your life?’ to ‘I was abused as a child’ so it’s a lot of pressure. I love it but it’s also a lot of responsibility because I’m only some musician from Texas I’m not a doctor. So that’s been the tricky part, finding a way to say ‘Thank you for sharing, I’m here to listen, here are my struggles and my experiences, and here’s how I relate to them – but if something that hard-core is going on, please, go and talk to someone with some sort of qualifications.’

Shortly after your last trip to the UK you had some trouble… what happened?
I just had a big moment where everything had turned into ‘how much money is everyone making?’ and people were being very stingy with the money that was being made and it just became a big, greedy mess – and I hated it because I love music and I love being able to play music. Now I’m just going to take care of myself and my family – and I’m happy. It’s my life and my job and I was really starting to feel like we were taking advantage of people and I don’t think that’s right in today’s fan-finding, Pledge Music, Kickstarter world. I think that there has to be kind of a mutual respect. Not ‘How can we sucker as many people as possible into spending as much money as possible?’ That’s where it started without really throwing anyone under the bus. I just had a moment and a disagreement behind the scenes and some people said ‘No, this business is all about the money, people want to spend it, left them spent it’ – that’s something that I don’t like.

You wrote about struggles with gossiping and bullying too.
I did. The shit hit the fan with my former management and it was really weird, it just got a little gossipy – again, behind the scenes – and some people were talking like ‘People on Vacation is breaking up’ and it just wasn’t the case. Jaret was going back to Bowling For Soup for a while and I was like ‘You know what? This is the perfect time to do this solo thing, and I’ll do it my way.’ Some people took that the wrong way and felt like they needed to be ‘Team Jaret’ when really there was no need, it was silly. I had these people using fake emails addresses saying ‘you’ll never be anything without him’. It was the weirdest, most unnecessary thing. ‘Get over yourself’, ‘you’re nobody’ – it was terrible.
I was about to ask about People On Vacation…
I don’t know – I think people forget that…well…nobody really knows who are here in the UK – or who we were. I had this career with Smile Smile up until Jaret, and then Smile Smile went away and Jaret and I started doing People on Vacation but he always had every intention of getting back to Bowling For Soup on some level – I knew touring was off the table at some point. But it was always my intention as well, to eventually make a solo record or do something else and not just be in People On vacation because I knew that there was going to be a point when Jaret would dive back into Bowling For Soup. So it feels like when we first met, when Smile Smile were still going on and he was in Bowling For Soup. I think that we’ll eventually circle back around to People On Vacation but right now he’s doing his thing and he’s got a lot going on and so do I, so it would be hard to do that as well right now.

You started a record label.
I did.
Are you signing other acts?
We signed one band recently [Shiva and the Hazards].
What are they like?
Like if The Brian Jonestown Massacre and Oasis had a baby. That’s what it feels like. Weird oasis. Really cool.

So this is your first full band tour. It’s just started, but is it everything you hoped?
It is. It’s so refreshing and rewarding to not be so focused on ‘How many tickets did we sell? Can we bump up to a bigger venue?’ We just go and play for as many people as want to be there and everyone that is there is super excited and I can tell that they feel like they’re part of something instead of just ticket-holders who will maybe see you next time and you’ll never actually get to say hello.
I think that’s down to you though.
I guess so.
You level of fan service is so beyond anyone else’s. It makes people feel special.
Good. They should feel special. Seriously, I can’t over state this: treating a person like a consumer, like someone going to the grocery store to buy something – I don’t think music in the same. I don’t think concert tickets are the same. I can’t do that. I feel terrible treating fans of music like that. If they do feel special or like they’re part of something, that means I’m doing something right.

You’ve got Danny Guff with you – was his the obvious choice?
He was the first person I thought of. We hit it off on the People On Vacation tour.
Well, he won a competition to support you guys – that’s always a risk, isn’t it?
Yeah. It’s a big chance to take but it’s worked out awesome and we had a lot of fun on that tour he ended up just coming on the bus on that one, just him, so it worked out and this trip it’s more laughs and silliness.
We really like him.
He is good.
What’s next after the tour?
[thinks for a few seconds] I didn’t know, I’d only planned up to here, and I hate to do this – but I’m going to – I’m going back on tour with a much bigger act as main support, I just found out five days before I left.
Can you say who?
[smiles and shakes head] Nope.

And finally, have you learned any new English words or terms?
Yeah but they’re terrible.
Good.
It’s mostly Mickey. Oh my god. Mickey, my drummer – and I love him – but if his wife reads this he’s going to murder me so make sure to include that disclaimer. He just says things like instead of ‘I bet he was masturbating’ or ‘jerking off’ he’ll say ‘I’ll bet he was knocking a batch out’. A batch? Knocking a batch out? [laughs]. I’m going to stop there.
I have a few to test you on. Not quite so bad. Do you know what chebs are?
Yeah, but I can’t remember right now.
Boobs. Do you know what banging is?
Like ‘good’?
Yes. Or?
Or doing it.
Correct. Do you know what a butty is?
Erm…no. I’m going to guess a cigarette butt.
It’s a sandwich.
A butty?!
Yep. Do you know what bantz is?
Bubble pants.
If only. It’s like when you tease someone.
Just bantz?
Banter.
Oh, see if you’d said that, I feel like I would’ve known. I hate it when some of my British band friends go out and they post pictures on Twitter and they put the hashtag ‘LADs’. I wanna reach through whatever device they have and slap them.
Lads have bantz.
[laughing] I know I’d heard it before. It’s the worst.
Do you know what mardy means?
Fancy?
It means grumpy or moody.
I was way off.
Last one. Hanging.
Hanging…like gagging for it?
It’s like when you’re hungover.
Dammit. Way off again.
It’s OK, we like to stump you now and then.