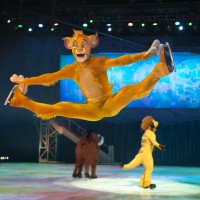 A host of colourful Disney characters are set to descend upon The SSE Hydro in Glasgow later this week when Disney on Ice’s 25th anniversary show skates into town.

The children’s show, entitled Silver Anniversary Celebration, honours the skating spectacular’s 25th anniversary and features scenes from some of Disney’s most well-known classics including The Lion King, The Little Mermaid, Peter Pan and Frozen.

The show follows Mickey and Minnie Mouse as they embark upon the ultimate sightseeing holiday with their friends, during which they visit London, the African Savannah, the depths of the sea and the wintery town of Arrendalle.

Producer Kenneth Feld, of Feld Entertainment, explained: “It’s an extraordinary show and a family vacation all rolled into one incredible night. You really get a sense you are travelling right alongside Mickey Mouse, Minnie Mouse and their friends. We can’t wait for the UK audience to celebrate the Silver Anniversary of Disney on Ice with us.”

The show features a cast of over 50 internationally-renowned professional skaters and a score comprising countless Disney classics including Under the Sea from The Little Mermaid, I Just Can’t Wait To Be King from The Lion King, You Can Fly from Peter Pan and Let It Go from Frozen.

Before the end of the tour, the show will also visit Leeds and Nottingham.