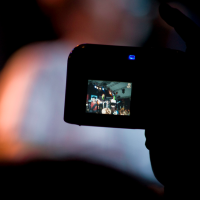 Apple are usually at the forefront of technology, bringing consumers the products and services they never realised they couldn’t live with out. Well now, they’re patented something that will render one of their own features useless: technology that could stop smartphone cameras being used at concerts.

The patent details infrared signals that can be beamed out in public places – like gigs – and could then either flash up a message to those trying to use their smartphone camera, or even disable use of the camera all together.

Tech journalist Stuart Miles thinks this might land Apple in the bad books of frustrated consumers.

“It could harm Apple in the eyes of some people,” said Miles, founder of gadget site Pocket Lint.

“People like freedom of speech – and who is Apple to tell me I can’t record something?

“But Apple patents stuff all the time, a lot of big companies do that. It might be created for one purpose, but end up used for something else.”

An ocean of smartphone screens is not an unusual site at any gig these days, and although technology has come a long way, an iPhone from the back row of an arena gig isn’t exactly going to capture an SLR quality shot that can be sold on.