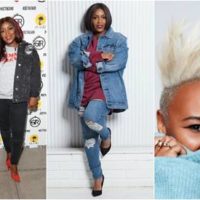 On June 21st Girls I Rate will welcome a host of leading figures from within the creative industries to Temple Pier, Victoria Embankment to celebrate women and change. Hot on the heels of their successful Get Heard event that collaborated with industry experts including PRS and Island Records the Girls I Rate summer soirée will be attended by the global chart-topping Emeli Sandé; winner of the NME Outstanding Contribution to Music Award, Wiley and Brit Award Winner Lily Allen.

Founded in 2016 by Carla Marie Williams, Girls I Rate is a movement to champion women across the arts, giving them a platform to express themselves, share experiences and develop up-and-coming talent. Williams, whose credits include Kylie Minogue, Britney Spears and Beyoncé, is an inspiring voice for change and an advocate for equality within the creative industries.

The fundraiser will bring together a bevy of A-list guests committed to raising funds to drive the movement forward and creating further opportunities for women. Hosts joining Williams on the night include; DJ and celebrity stylist Alexis Knox who has dressed the likes of Miley Cyrus, Little Mix, Ciara and Nicole Scherzinger; MTV and UNILAD presenter Rio Fredrika; BBC’s 1Xtra DJ Melody Kane and Sarah Richards, choreographer, dancer and a regular feature on Britain’s Got Talent and X Factor.

International songstress Emeli Sandé, commented; “It saddens me to see the blatant gender imbalance within the music industry, particularly in executive positions and music production. The skills and talent are not missing, I believe it’s caused by a lack of confidence and support. I want to be the best example I can be to women and to give them the courage and hopefully the inspiration to blaze bright and kick down all the doors that have been unfairly closed to them over the years.”

Artist, songwriter and producer Wiley added; “I want to support Girls I Rate because of the inequalities women face sometimes. I’m all for empowering women, having daughters helped me to realise that equality is very important’’.

Join the movement and the conversation #BringingWomenTogether.