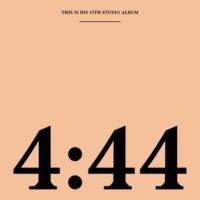 The album, which can only be streamed via Tidal, is the rappers 13th studio album.

This lyrics have already got people wondering if the lyrics are confirming that Jay Z, real name Shawn Carter, cheated on Beyonce. Rumours originally started flying after an incident where Beyonce’s sister, Solange, slapped Jay Z in a lift, followed up by some seemingly damning lyrics on Beyonce’s Lemonade album.

The album is receiving huge praise from his fellow rappers. Rick Ross posted to his Instagram saying: “Day I played jay “Rather you than me”.He played 2 off 4:44.My admiration for this brother goes beyond Maybach pt1,Freemasons,Devil is a Lie.This is one of the few examples of #hustle I can look to that inspires even myself.Sports management,champagne and spirits to Tidal.support the culture,subscribe now and enjoy the album[sic]” while Kendrick Lamar tweeted: ‘4:44. WOW. MASTER TEACHER.’

Fans are loving the track too. Twitter is flooded with positive tweets and 4:44 is wracking up plays on Tidal.