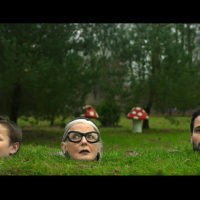 Their album is a little more mellow than this debut with harmonies, strings and huge songs for lovers of Tame Impala, Black Angels, Beatles, Ween, Flaming Lips and MGMT.

Future War Bride’s frontman, Mikkel Böstrom has channeled these simple messages into their new video for debut single, Gloves Off. A track that was recorded at the same time the Copenhagen based singer’s memory was actually failing him. The song itself is a fragmented example of Boström’s medicated experience depicting two contrasting universes that collide and create. It’s surprise, psychedelic, ejector-button chorus playing make-weight to the driving off-beat rhythms and synth-led melodies, sounding like a thunder storm in a fight with a rainbow.

The video for Gloves Off is a weird reminder of those questions above and at the same time, a portrait of a world where everyone is losing their heads, young, old and all in between. Start a peaceful war today by sharing their debut video.