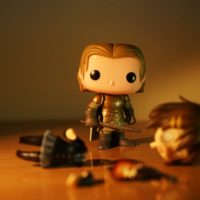 Thinking of picking up a new TV ready for the return of the most anticipated show of the year? We’ve broken down the tech you need to make the most of Winter’s arrival…

This July the final season of Game of Thrones will be unleashed onto screens around the world, with viewing figures of more than eight million every week in the UK alone and budgets upwards of $10 million per episode, it is set to be the TV spectacle of the year. When all is said and done, who will finally reign over the Seven Kingdoms?

It’s no surprise that TV brands, such as Hisense, see large leaps in sales in line with widely anticipated TV moments. The World Cup, new seasons of the most popular TV shows and the Royal Wedding have all caused increased sales in the past and this year’s Game of Thrones finale has retailers and manufacturers geared for a surge in sales as customers get set for the TV event of the year.

The question is what features does your brand-new TV need to inspire envy amongst your friends and allow you to experience Winter’s arrival and the final phase of the battle for Westeros in all its glory?

Upscaling
Game of Thrones will be broadcast in 1080 HD rather than the full 4K UHD and therefore a powerful upscaler is key to any new TV acquisition this summer. Without powerful upscaling technology 1080 HD can be underwhelming when tasked with filling a 4K display. Sets with upscaling can maximise a standard HD picture, improving clarity and resolution considerably.

High Dynamic Range (HDR)
There’s no doubt the most spectacular TV moment of the year will be Daenerys and her dragons’ arrival in Westeros as the battle for the Seven Kingdoms comes to a climactic conclusion. But how can you ensure those bursts of flame really pop as they erupt across the screen? The answer, HDR and local dimming technology. HDR drastically increases the colour and contrast range a screen has at its disposal, while local dimming means the TV’s backlight is broken down into several independent panels to further increase contrast. HDR and local dimming is a must for any Games of Thrones fanatic that revels in watching their hero traverse a dank and dark path with only a single flickering flame to light their path.

Wide Colour Gamut (WCG)
You might want to re-watch some of last season to truly appreciate how a wide colour gamut can change your viewing experience, not just because it was so good but because those breath holding moments will be even better – just think vivid colour! What a wide colour gamut does is increase the number of shades available between colours for a more crisp and lifelike viewing experience – another step towards more realistic TV images.

Imagine re-watching those seconds when the wildfire erupts through the passageways and busts through the windows of Kings Landing with more clarity than you ever thought possible, with lifelike greens, reds and blues. Each colour and detail sharpened to a knife-like point, the equivalent of Valyrian steel.

Equipped with HDR plus and an 85% wide colour gamut, a 16-block local dimming system and motion blur reduction technology, the N6800 is available from £749 and is the perfect first 4K TV for any Game of Thrones fanatic. For those looking to step up the heady heights of premium UHD, the Hisense NU9700 is equipped with HDR Supreme and a 100% wide colour gamut, motion blur reduction technology and 128 panel local dimming technology, the 70-inch model is available for £2,999.

It’s not just the battle for Westoros that will see increased TV sales, but next year’s World Cup will lead to another wave of people investing in the latest technology to maximise their viewing experience. Hisense is an Official Sponsor of the 2018 FIFA World Cup Russia, the partnership will see Hisense, whose UK headquarters are based in Leeds, become the Official Television of the 2018 FIFA World Cup.