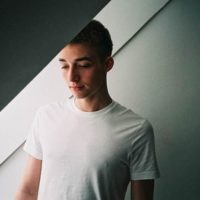 Maximillian has released the studio version of his track ‘Feelings’.

The 17-year-old Danish rising star is already setting about making his mark on the music world – we were especially blown away by his Hey Now / Pink + White cover, tracks made famous by London Grammar and Frank Ocean respectively.

In February this year the aspiring young singer put out a live video of the song on his Facebook page. Within a days, the performance had been watched more than 90,000 times.

It seemed that the world had immediately connected to Maximillian’s spellbinding voice and ethereal sound. Finding his inspiration from artists like James Blake, Frank Ocean and London Grammar, Maximillian has shaped these influences into some uniquely his own.

Maximillian writes and produces his music out of a small Copenhagen-based studio.