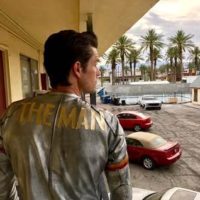 The Killers have released the video for their dazzling new single, “The Man”, the first to be released from the group’s upcoming fifth album, Wonderful Wonderful. The video release follows the band’s spectacular, hit-laden surprise set at Glastonbury and just ahead of their sold out (they’re the only headliners in the series to do so) show in Hyde Park on Saturday 8th July.

The video for “The Man” was shot in and around Las Vegas and sees The Killers collaborate with the award-winning director Tim Mattia for the first time.

Wonderful Wonderful will be The Killers’ first since 2012’s chart-topping Battle Born. Recorded with the producer Jacknife Lee during album sessions in Las Vegas and Los Angeles, the new LP is shaping up to be the band’s most sonically forward-thinking record yet; an album bursting with all of the blazing choruses and arena-filling anthems that make The Killers one of the world’s biggest and most beloved rock bands.

Renowned for his ability to paint evocative pictures of small town American life, Killers frontman Brandon Flowers turns that remarkable skill on himself with “The Man.” The song finds Brandon looking back on his younger self, the “Brandon Flowers” persona from their Grammy-nominated debut Hot Fuss, and reconciling that wide-eyed character with the man he is now. It’s also the most infectious pop song of their already accomplished career.

The Killers headline multiple festivals this summer in the US and across Europe, with shows in Spain, Sweden, Germany and many more ahead of the upcoming release. Upcoming dates below: