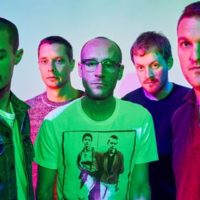 US Indie legends, Cold War Kids have released a brand new video for their recent single “So Tied Up”, featuring the up-and-coming UK singer/songwriter Bishop Briggs. The tracks a stomping, gospel-infused number that shines a light on everyday struggle (“Love is a twisted game and no one ever wins”) but undeniably burns with the promise of hope. The video is about the tension and struggle of relationships. On one side there’s the sweetness on the surface and on the other the violence that bubbles underneath, it works as a metaphor for all of our love lives.

The band have followed on from the release of their brand new album, L.A. Divine by announcing their first live shows in the UK for 4 years this summer with three shows across the UK, Including a slot at the Killers hosted British Summer Time at Hyde Park on the 8th of July and a headline show at London’s legendary Shepherds Bush Empire, a venue they last played 10 years ago in 2007!

LA Divine, Cold War Kids’ most expansive and ambitious effort so far, pays tribute to Los Angeles in all its strange glory, embodying the Long Beach-bred band’s endless fascination with their adopted hometown. “In many ways, LA is the least divine city, the most hedonistic and irreverent and disconnected from history,” says Willett. “LA’s so massive, I feel like I’m always finding something new in it,” adds bassist Matt Maust. “It’s an incredibly weird place, and I’m happy to have made an album that totally honors that weirdness.”

Coming on the heels of 2014’s Hold My Home – which featured the chart-topping, Gold-certified single “First” – the band felt emboldened to bring a more deliberate, purposeful spirit to their music than ever before. Produced by their repeat collaborator Lars Stalfors (Health, Local Natives), LA Divine opens with lead single “Love Is Mystical”: a soulful, sweeping anthem about seeking transcendence and greater depth in love. Praised by NME for taking Cold War Kids’ “rousing and soulful anthemics to new heights,” “Love is Mystical” held the No. 1 spot for Most Increased Plays at AAA radio for two consecutive weeks and is already in the Top 5 of the Alt 18 Countdown. The single already has more than two million streams on Spotify globally and jumped into both Spotify’s U.S. and Global Viral charts .