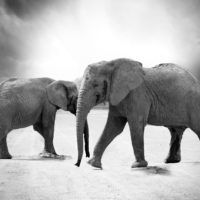 For the first time, human words and emotions can be translated into elephant calls that signal similar emotions or intentions.

A new campaign led by the David Sheldrick Wildlife Trust (DSWT) will allow people to send a message to their friends and family in the Elephant Language. The campaign has launched for World Elephant Day, 12th August 2017.

Elephants have one of the richest repertoires of communication and are amongst the most emotionally sophisticated animals on the planet. They demonstrate humour, compassion, cooperation, self-awareness, joy and grief – elephants, humans and Neanderthals are the only known animals to participate in death rituals. Their complex language however, is endangered along with the species. By inputting a phrase by voice, text or emoji at www.helloinelephant.com, people will see a video of an elephant communicating the same greeting or emotion back to them. The video can be immediately shared with friends via Facebook, WhatsApp and Twitter to help raise awareness of the elephants’ plight.

The Hello in Elephant campaign has been developed in partnership with ElephantVoices, using its founder and esteemed conservationist Dr Joyce Poole’s research into elephant communication and behaviour, which has been conducted over her 40-year career, working with and studying elephants.

Joyce Poole, founder of ElephantVoices expressed: “Elephants are awe-inspiring and every moment in their company brings joy. Unlocking their rich emotive communication and gaining deeper insight into their world is fascinating. Yet, elephants and their habitats are under assault, and we urgently need to change hearts and minds.”

Born from the Sheldrick family’s passion for Africa and its wilderness, the David Sheldrick Wildlife Trust is today the most successful orphan-elephant rescue and rehabilitation program in the world and one of the pioneering conservation organisations for wildlife and habitat protection in East Africa.

Elephants are in increased danger of extinction due to poaching and habitat loss. There were over 10 million African elephants in the early 20th century, now there are less than 400,000. By 2025, scientists predict there could be only 190,000 left.
Angela Sheldrick continued: “Africa’s wildlife is being pushed to the brink of extinction. The lucrative illegal ivory trade is killing up to 70 elephants a day, human-wildlife conflict is leaving behind injured and orphaned wild animals that would not survive without intervention and habitat destruction is endangering important biodiversity areas. Through this campaign’s celebration of this magnificent animal, we hope to raise more awareness of the elephant’s plight and funding for elephant rescue and conservation projects.”