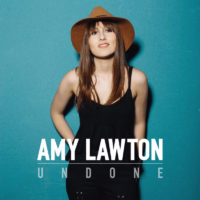 20 year old singer/songwriter Amy Lawton has today released her debut single ‘Undone’. A gorgeous, upbeat slice of country pop, the single is an impressive introduction to one of the brightest new talents to emerge this year. ‘Undone’ has already received great support from Deezer who featured the song prominently in their ‘Brand New UK’ playlist.

Regarding the single Amy says, “The song is a kind of wild confession of someone’s real motives in a relationship, which I was inspired to write after talking to an ex-boyfriend after he showed up at one of my gigs.”

Amy first honed her craft on the London live scene, performing at many famous venues in the city such as Ronnie Scott’s, The Troubadour, The Bedford and The Social among others.

Her biggest show came as support to Jack Savoretti last year at London’s Cadogan Hall. More recently, she held a six-week residency at the West End nightspot Mahiki in early 2017.

Ever since childhood Amy has been creating rhymes, poems and short stories. For the past six years she has been crafting these ideas into song, writing with the likes of Dee Adam (Diana Vickers, Newton Faulkner), Jess Sherman (Ward Thomas), Pam Sheyne (Christina Aguilera, Corinne Bailey Rae) and Paul Herman (Dido).

Armed with experience sharpened well beyond her years, ‘Undone’ is a truly exciting first taste of what’s to come from Amy Lawton.