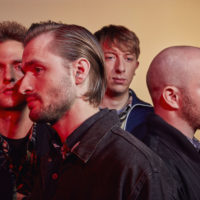 We’re more than half way through the year and festival season is almost over. As the weather gets colder and the nights grow darker it’s easy to start feeling a bit low… so check out our list of tours to top off 2017 – there’s still plenty to look forward to from some absolutely amazing artists.

A band that defies genre boundaries, the weird and wonderful Wild Beasts have previously been described as Marmite. Well, if that’s the case, smother us in the stuff because we cannot get enough of this band. With only four more UK shows on their schedule, you have to catch this band while you can. Check them out at the Portmeirion Festival, The Welly Club in Hull, Beyond The Tracks Festival in Birmingham and Simple Things Festival in Birmingham.

London Grammar are taking their unique indie-pop-electro sound on tour. Their latest album, The Truth is Beautiful Thing, is an evolution rather than revolution. The band boast a very refined sound, which is completely their own. Catch this band on their forthcoming UK tour and marvel at lead vocalist Hannah Reid’s beautiful voice live.

This November, American synthpop band Future Islands are coming over for a UK tour and it’s one not to be missed. Frontman Samuel T Herring is knowing for putting on one hell of a show, winning the hearts of audiences with his enthusiastic performance of ‘Seasons (Waiting on You)’ on David Letterman’s show back in 2014. Catch them on our shores while you can.

Run The Jewels and Danny Brown

Yes, you read that right, Run The Jewels and Danny Brown are embarking on a UK tour together this November. Their latest album, Run the Jewels 3 may follow the conventions of the duo’s previous two albums in its title and album art, but this similarity does not signal creative stagnancy, it rather chronicles an extraordinary growth. Teaming up with the likes of Danny Brown will make for an extraordinary a show that you shouldn’t miss.

The legendary Weezer are a band that have been on our radar since we were teenagers. But Weezer are not just a nostalgia kick, they’re a band that is constantly evolving, earning their place on today’s music scene. Rivers Cuomo and co will be playing a sting of dates up and down the country this October.

Queen are legends, there’s no simpler way to put it, and while the one and only Freddie Mercury cannot be replaced, Flecking favourite Adam Lambert is doing a great job fronting the band. Freddie’s shoes are huge ones to fill, but Adam isn’t trying to, making the songs his own whilst still respectfully being true to them. Check them out and judge for yourself on their forthcoming UK tour.