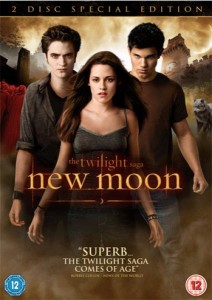 New Moon is set for release on Monday so now is the time to prepare for a new wave of Twilight hysteria!

It is also a reminder that the time is coming for the next instalment of the hit films, Eclipse, which will be out in cinemas soon. (9th July for us here in the UK)

If you haven’t seen it yet, click here to watch it.

If that leaves you thirsty for more, you can watch a short behind the scenes video here. The video will also give you a better look at the new actress who will be playing Victoria after Rachelle Lefevre was sacked due to several scheduling conflicts for Eclipse and the other movie she was doing at the time. Oh and not forgetting, it will also give you a look at Robert Pattinson in Moody Edward Mode. Squeee!

The next instalment looks pretty good from watching that video, but we can’t help but disagree with the comment “The boys will enjoy this one”. Yeah, it looks to have a bit more action scenes. But I can’t see any of our boyfriends skipping down to the cinema with us when it comes out…