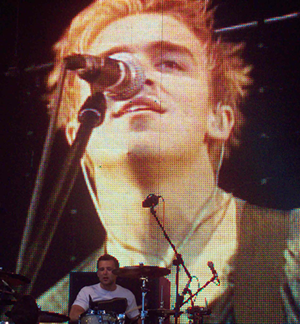 “I have to admit, sitting in a field for hours on end is not my idea of fun, but I’ve seen what these McFly fans are like first hand and and I wanted a good view of the boys then sitting in that field was my only option.

When I arrived at 2.30 pm (it wasn’t due to start until 8pm!) there was already a fairly long queue. At the very front were the dedicated (or crazy – your choice) French fans who had camped out overnight. Not only were there French fans, there were Americans, Brazilians and several other dedicated fans who had travelled from far and wide just to catch a glimpe of their favourite guys in a field in the North West of no-where (otherwise known as Wigan). I can’t help but think these people are slightly crackers as well as dedicated.

Before the gig started there was drama drama drama (as is expected with girls all fighting for a place in the young lad’s hearts) when one girl got a nice shiner from another who accused her of queue jumping!

Support band TwentyTwenty were very McFly-esque. Three quite hot guys who were actually quite good – the best support act of McFly’s that I have seen so far, and some of the superfans already knew them and their songs.

After three and a half hours of waiting in a field and a further three hours crammed in a crowd of overly-excited girls and boys, McFly finally made it to the stage. Danny Jones, Harry Judd, Dougie Poynter and Tom Fletcher strutted on stage to a chorus of screams from their fans and burst straight into song, singing One For The Radio. Sounding the best I have heard them in ages, I couldn’t help but jump around with the people surrounding me – trying to avoid serious injury in the process.

They played the Radio:Active set list (for the last time) which I, as well as others I expect, was feeling pretty let down by as I’d seen it twice before, but they played it really well, throwing in a few extra songs like The Heart Never Lies which pleased the fans very much. Tom and Danny also played Too Close For Comfort together, which is one of my personal favourites, along with Dougie performing You Gotta Fight For Your Right which seemed to please everyone.

The boys teased us by asking if we wanted to hear their very long awaited new music. The crowd started chanting “we want more” as Dougie played a snippet of bass, giving next to nothing away. Danny distracted fans by playing some jazzy music, singing “chocolate” and doing a funny little dance which the crowd loved and could almost be called sexy.

As always, the foursome finished up with everyone’s favourite, Five Colours, which always leaves the fans happy and excited – myself included.

Overall, the four of them looked hot, sang the best I have ever heard them sing, added a few brilliantly chosen songs to the set list for a nice little surprise and kept their fans (even the ones that were doubting them for making them wait so long for new material) very happy. I think the band, and even the support band, should be proud of themselves for putting on such a brilliant show, a show that was well worth the long wait.

McFly’s fans are happy for now and hopefully the band will bring out the new stuff very soon, before the magic of ‘Gigan’ wears off and the fans start getting agitated again. Bring it on!”

McFly also unveiled their new logo at the gig.