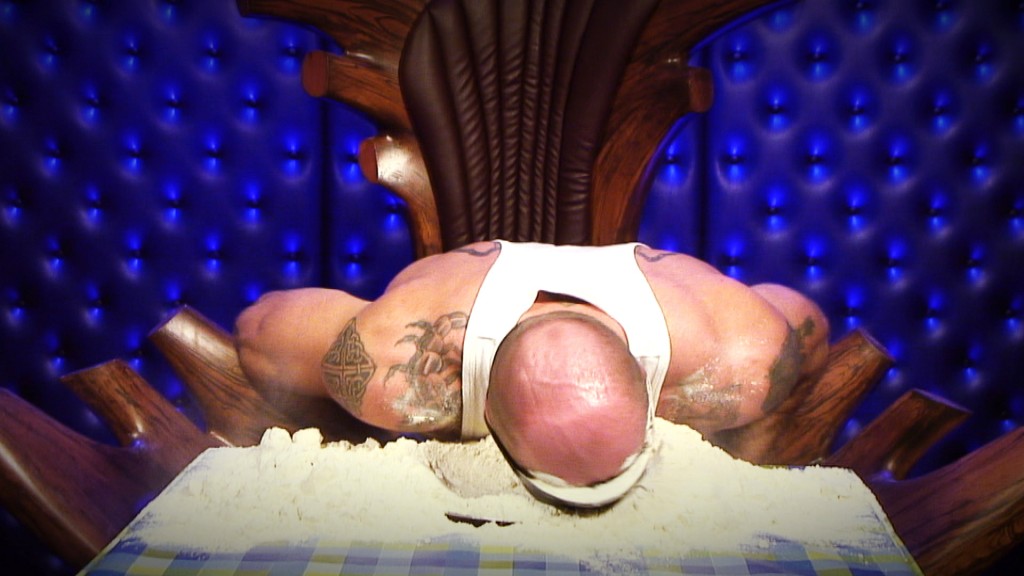 10:28am
Michael is the first housemate up. As he washes his feet he says to himself, but seemingly addressing Big Brother “Sorry I can’t bring something more exciting”. He heads into the garden to walk around in the rain. He says “when it rains, it’s like a little reminder from God – don’t forget me, I’m here… In England I always hear people complaining about the weather, but I love it” adding “love you Big Brother.”

Later, Michael and Romeo talk about evictions in the garden. “Big Brother is being very secretive about evictions” Michael says, adding “Somebody’s gotta go because of that fight” Romeo speculates that it could be Nicola, and it could be the Twins, dependent on who is backing their corners on the outside. Michael says “it’s such a ruthless process, it’s a TV show but we’re all getting so emotionally caught up in it.”

Meanwhile, Denise finds the hand to Andrew’s costume from a previous task in her fur coat pocket, saying to a few of the housemates “he is still with us.” She takes the hand into the garden to show Michael and Romeo, asking Michael in jest “did you put this in here?” Michael jokingly edges away from Denise and the hand as he walks back into the house, before heading into the bathroom where Nicola is bathing. He says to Nicola of Denise “does that women ever stop talking?” Nicola tries to appease him by reminding him there isn’t long left in the house.

1:07pm
Michael joins Frankie in the garden. They are talking about memorabilia from Michael’s films and what he gets to keep. Big Brother cuts away to various housemates comments about the paternal relationship between Michael and Frankie that has developed. Romeo is seen to say to Big Brother “As soon as Frankie walked in, Michael said he reminded him of his son” and Gareth is shown to say “Michael has been there, done that and wants to lead Frankie down the right path” Big Brother cuts to a past conversation between Michael and Frankie where Frankie admits he would like to come and live in the US. Michael says “If you come, I will help you find a place”

4:07pm
For today’s task housemates are given the opportunity to win a movie night for two later in the evening.

Denise is the first housemate to participate and on entering the Diary Room exclaims ‘what the hell is this?’ Big Brother explains that on the table in front of her is a mountain of flour and that hidden inside is a cinema ticket. The housemate who finds the ticket the fastest, whilst blindfolded and without the use of their hands, will be the winner and win the movie night reward.

Each housemate has a go at finding the ticket. With a face full of flour, Frankie says, ‘you talking to me?!’ Big Brother asks Denise if she has flour and water in her mouth, to which she responds, ‘I’ve had worse’. Frankie says it’s like having eaten 46 packets of Wotsits and Gareth says it is the worst thing he’s put his face and tongue in, and that they’ve been in a lot of things.

Later in the living room, Big Brother reveals the housemates’ times for completing the task. Denise was the slowest at 1 minute and 8 seconds. The twins run around as they find out their fast times, but it is Romeo who wins with a time of 4 seconds. Frankie and Karissa play Rock, Paper, Scissors to decide who will join Romeo for the movie night and Frankie wins, saying, ‘you know that shit!’

4:39pm
Michael is napping in the bedroom. The rest of the housemates are in the living area discussing surgery and circumcision. The Twins are telling the listening housemates that it is normal for men to be circumcised in America. Nicola, Gareth and Frankie are saying that in the UK it is not so common and mainly done for medical or religious reasons. Frankie says he only knows of 2 people who have had the procedure, and the Twins are in shock. The housemates wonder if Michael is circumcised and Frankie jokes “let Denise ask him” Karissa is curious and heads into the bedroom to ask Michael. He confirms he is, and then mutters “what a question” as she walks out. Nicola asks the Twins “was Heff circumcised?” to which Kristina promptly replies “how the fuck would I know!” to the amusement of the housemates. Nicola asks “did you not ask him?” Kristina says she hasn’t. Nicola tries to explain to the bemused Twins what circumcision looks like physically. Gareth attempts to help, explaining that it can be ‘indoors or outdoors…blanket on or blanket off’, and Nicola confirms this is correct whilst laughing.

10:24pm
Romeo and Frankie settle down to watch their film. Denise is taking time out alone in the garden. It’s been 2 days since the incident between Denise and Karissa. Michael and the Twins are discussing it “She shouldn’t have done what she did” says Karissa.

In the movie room, Frankie comments that an actress is fit. Romeo asks if he ‘would’ and Frankie says there’s not a lot that he ‘wouldn’t’.

In the bedroom, Michael says that when a subject comes up, Denise’s association with the subject suddenly becomes the most important thing and it makes him want to leave the room. Karissa says she has chosen to ignore it because Denise will probably end up going at the next eviction. Michael says he can’t guess anything anymore and Karissa tells him that Denise has a crush on him, leaving Michael in silence.

2:48am
Most of the housemates are in bed. The Twins and Nicola are in the living area discussing evictions. Karissa says “tomorrow I have no idea who will go” Kristina and Nicola agree. Nicola says that since Kirk and Natalie, she cannot tell any more, but admits if she thinks about it, she can understand why Kirk went, but not Natalie. Karissa suggests possible combinations of people who might go and says whatever happens, it’ll be weird.