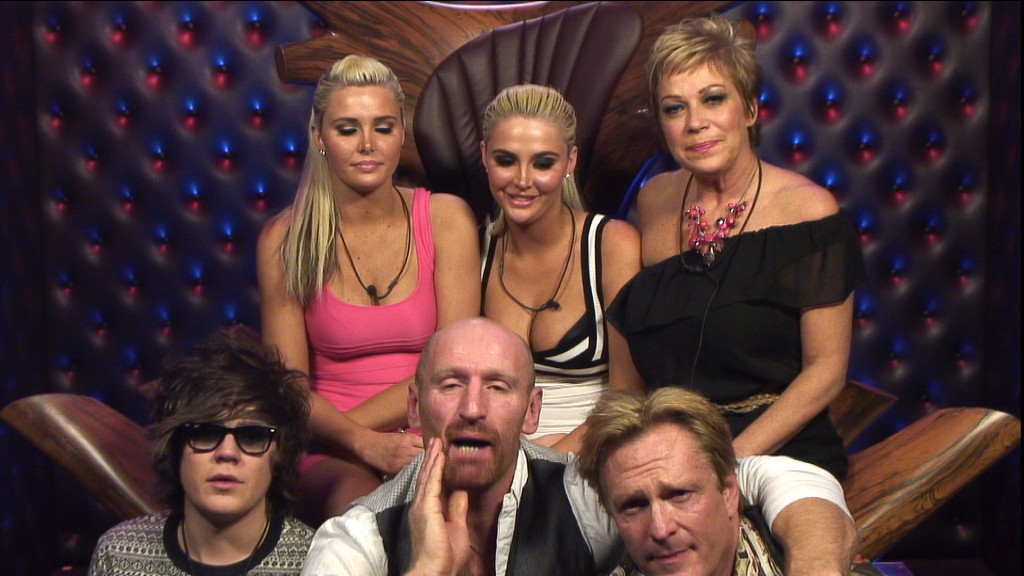 11.48am
Denise and Nicola are thinking about the impending eviction. Denise confides that if she goes, she will look forward to waking up without worrying about Michael’s mood.

12.01pm
Romeo is in the bathroom doing his daily moisturising routine. In the diary room, Gareth is talking to Big Brother about facing the public vote for the first time. “Hopefully I’ve come across as a good guy,” he starts, “and hopefully other people in the house have seen me as a good guy.”

In the bedroom, Nicola is trying on dresses ahead of tonight’s eviction. The twins and Denise give her the pros and cons of each dress before deciding that they favour a green dress. The twins tell her “when you show the boys they will go wow!” Nicola goes into the living area to ask for a male opinion. “The white one was better,” Michael says and Gareth agrees.

1.52pm
Housemates are preparing for today’s task which is called “Say it or Spray it”. The large task room has been turned in to a factory with a large conveyor belt inside. Nicola and Gareth are challenged with describing items that appear on the conveyor belt to the remaining housemates who are sat in the garden. They are not permitted to use certain words. If housemates successfully guess the food item it will be placed in a hamper that will go in to the house. If the housemates fail to guess what the item is, the food falls in a blender and its contents sprayed over the housemates in the garden.

When the housemates get sprayed for the first time, Frankie shouts “give it to me!” Romeo correctly guesses that Nicola and Gareth were describing chocolate and he shouts “get in, that’s how it’s done!” The twins start to sing “go Romeo! Go Romeo!” Later in the task, the twins have to guess that Gareth is describing peas to them. He mentions it is something you might have with your dinner. The twins guess “croissants.” Gareth adds that it is a food people use to shoot at each other. The girls guess “paintballs.” Gareth derides “I bet they don’t have peas in the Playboy mansion.” When the task is over, a filthy Frankie hugs a clean Gareth and gives him a kiss on the cheek to get gunge on him.

3.33pm
In the diary room, Nicola is telling Big Brother about her relationship with Frankie. “I’ve taken a step back” she says, referring to their fall out the other night. “I wouldn’t put myself out to have his back” she says.

Michael and Frankie are chilling in the hot tub. The boys look over into the bathroom and Frankie comments that the twins aren’t all what they seem: “I think they look terrible without makeup,” he says before jokingly imitating that the girls have goofy teeth and “weird lips.”

3.56pm
Denise is alone in the garden and begins to get upset. She goes to the diary room and tells Big Brother: “I just feel lonely in a crowd of people.” She says that the root of her upset is down to “feeling old” in the house, especially now that “old soul” Natalie has gone. “I feel I’m on eggshells a bit,” she concludes, “my dreams are really intense. It’s just time to go really.”

4.29pm
Kristina, Karissa and Michael are in the bedroom speculating on who might be evicted. The twins say that they would be surprised if Gareth was evicted but Michael says that it could happen and that the housemates are “only assuming he’s a champion.”

Romeo is telling Big Brother about the mood in the house. He admits that there is a “sense of balance in the house now.” “There’s peace in my house right how and I’m loving it” he says. He tells Big Brother who is desperate to make the final and explains that he thinks Michael and Kristina and Karissa would love to make it to the end. He also says that he has a gut feeling that his time in the house might be up.

In the bedroom, Michael and the twins are continuing to talk about the other housemates. They begin joking around and Michael admits “I’d rather have sex with Gareth than Denise.” He then lists his thoughts on why Denise has made it so far in the competition, detailing that she has Frankie “on her side” Kristina and Karissa assure him that he has a lot of fans. “You’re an American actor!” they say. They also reiterate that “we also have a lot of fans.”

8.22pm
The housemates are finishing getting ready ahead of tonight’s eviction. Denise and Gareth are talking in the garden. Gareth tries to reassure Denise not to worry about tonight’s verdict saying, “everything has a hero and everything has a villain.” Denise says that she just hopes that people who liked her before the show still like her. She says that she has learnt that she can’t please everyone.

10.04pm
It has been 20 minutes since Nicola was evicted from the house. The housemates are in the garden whilst the twins are speculating on the sofas. “Imagine if it’s just me and you in a house full of boys,” Karissa says to her sister. They are proud that they have survived all previous evictions despite being “booed three times!”

10.22pm
The housemates have been gathered on the sofas for the second eviction. “Oh, we’re gone” the twins say when Brian starts to talk to the house. When Romeo is evicted, the housemates all seem shocked. We see Denise say that Romeo “is one of the nicest men” she has met. Frankie says “the house will be a lot less cool without Romeo.” Gareth also says that Romeo was cool, adding “he doesn’t walk, he floats.” When Romeo leaves the house, Big Brother calls all housemates to the diary room. “We are happy Romeo was cheered and we’re happy Nicola is with her family” Gareth beams. The finalists tell Big Brother that they will all raise a glass to all of the previous housemates tonight. “Except Andrew Stone” says Frankie, “No I’m being serious.” The housemates laugh.

11.02pm
The twins and Michael are talking about making it to the final. “So we’re the winners!” Michael says and the twins agree that making the final also makes them winners. They also add that viewers must be keeping Denise in to witness more drama.

Gareth and Denise are in the garden discussing the twins. “I’ve had ups and downs with the twins,” Denise says, “I have never met girls with such confidence who openly say ‘we’re the hottest girls in the world.’” Gareth says that the twins are “in it to win it” and have openly said that they want to win the show. “It means they’re playing a game” he says. Denise laughs as she contemplates her time in the house: “To think I’ve lived in the house for three weeks with Michael Madsen and Playboy twins!”

1.32am
Frankie is making a midnight snack and tells Denise how he poured chocolate spread into his coco pops to make the ultimate treat.
In the Diary Room, the twins tell Big Brother that they are shocked by Romeo’s departure. They admit that they think Denise must have a lot of fans keeping her in “but we have built a good fan base who are voting for us.” They put their survival to the final down to their personalities: “People see how real and humble we are. We have a lot of respect for ourselves and have personality. We are very great, honest people.”

2.05am
The housemates go to the Diary Room and individually talk about their Big Brother experience. “In here, there ain’t no script,” he says and later adds that he wanted to see if being who he was really was the real him. Gareth tells Big Brother that he feels he is a different person due to the experience: “For me, it has broken down a lot of fearful barriers that I have.” Denise admits that she has learnt that she can’t always please people all the time and says “my proudest moment was when the young ones leant on me as a mum.” Frankie says that people like him for who he is and that he never expected to get past the first eviction. The twins tell Big Brother “each day, we have the same mind set; to win” and later reiterate “it is our goal to win.”