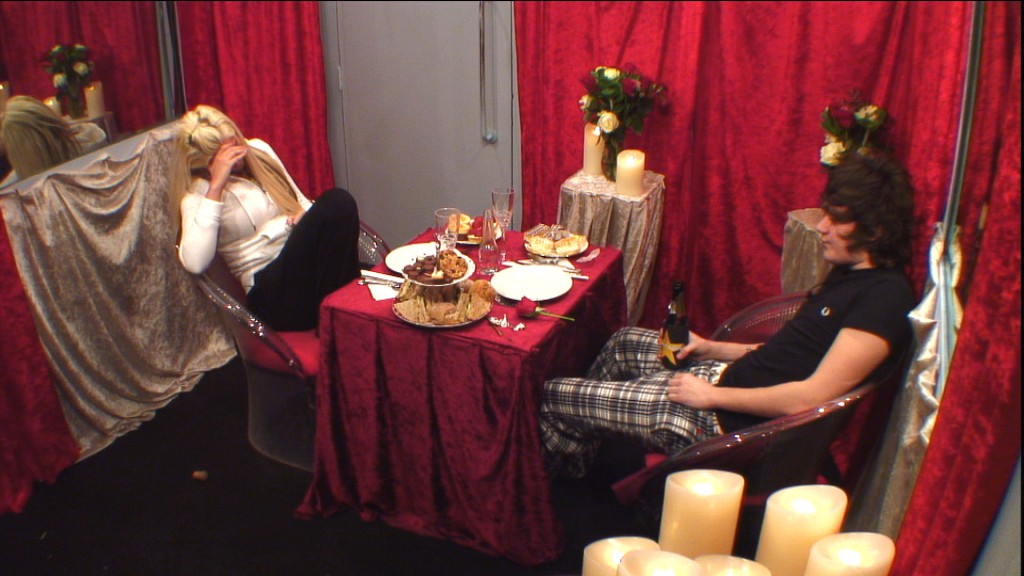 What went down in the Celebrity Big Brother hiz-ouse on day 9.

Following last night’s special party, the house is slowly waking up. Gareth tells housemates: “I can’t remember much about last night.” In the gym, Michael comments: “I don’t think that Tash is gonna be up any time soon.” The twins are also talking about Natasha. They tell some of the housemates how “smashed” Natasha was last night when she pleaded for more alcohol in the diary room. They mimic her saying “I’ll do anything.” Natasha joins Nicola and Natalie in the garden and Natalie says she’ll be “gutted,” that one of them will be leaving tonight. Nicola says that she will be “fine” if she leaves as she will get to see her husband and children. “If not, I’ll get to have a few more belly laughs,” she adds. Natasha reflects on her behaviour the previous night and tells them, “I can’t help my actions.” “You gotta be you,” Natalie empathises.

Michael and Natalie are in the kitchen talking about their friendship after life in the house. “I’m gonna see you no matter what,” Michael tells her and Natalie says that would make her a “very happy lady.” She tells him that a future meeting could mean that she is working on a film and tells him to “keep me in mind” for any film roles. “I might not be a lot to look at but I’m a good actress,” she tells him.

Natasha is in the diary room talking to Big Brother about last night. She admits to having “10 inch thick skin” but still cares what people think of her. “I’m nervous and anxious about the outside,” she says tells adds. Natasha becomes upset and starts to cry. “I don’t think it’s my time to go,” she muses. She says that she never cries but has done so twice while being in the house. Natasha says that she has liked “having time to reflect,” and hopes to be a “better person,” when she leaves.

Frankie joins some of the girls in the garden and confesses that during the night, he got up and relieved himself in the bathroom. “I couldn’t sleep,” he laughs and Natalie feigns disgust. Some of the girls start to laugh and Nicola wretches repeatedly. “I think I’m going to throw up,” Natalie deadpans.

Michael and Frankie are having a father and son moment in the bathroom. Michael comments on Frankie’s lack of shaving skills and then does it for him. “Please don’t cut my neck,” Frankie jokes.

Most of the housemates are having lunch at the dining table. Denise asks Gareth what he would choose to have as his last supper and he chooses tomato soup. In the garden, Michael and Frankie’s bonding session continues. Michael tells Frankie that he lost his virginity at aged 13 to a 28 year old neighbour. “She said she needed help moving furniture,” Michael reminisces as Frankie congratulates him. They bump fists, head into the house and then join their fellow housemates for lunch. Denise asks Michael the last supper question and he looks confused before adding: “That makes no sense to me.” He tells her that he wouldn’t want to eat before dying, “I wouldn’t be hungry,” he adds. Denise briskly tells him that it doesn’t matter and redirects the question to Frankie who gives her a rundown. Michael leaves the table soon after and Denise and Natalie look at each other. “I don’t get him,” Natalie adds.

In the bedroom, Michael is stewing about Denise when Frankie joins him. “I’m going crazy, I can’t take anymore,” he adds. Michael comments: “She’s bugging the s**t out of me, trying so hard to be entertaining.” He begins to mimic what his answer would be to the last supper question while pacing about.

In the living area some of the housemates are discussing their morals. Gareth says that he could forgive an indiscretion “if you really love someone.” “No way! Could you forgive your brother?” Nicola questions. Natasha listens in silence and Gareth repeats his comment about love. Nicola says that if her husband slept with her sister she would not forgive him. Natalie agrees with her and Nicola says that an indiscretion like sleeping with “your kid’s uncle,” would jeopardise the happiness of the children. Natasha remains silent and looks deep in thought.

3:19pm
Big Brother calls Frankie and Romeo to the diary room and sets them a task. Romeo must “impart” his romantic know-how and turn Frankie from Mr Pervert into Mr Perfect. Romeo gives Frankie a dating master class ahead of his two secrets dates with Karissa and Kristina. Romeo takes notes while watching the dates on a small TV in the diary room. The first date is a disaster as Frankie burps and makes innuendos throughout. Karissa scores him zero out of 10 “cos he downed the champagne and kept burping.”

4:24pm
After a bad first date, Romeo advises his protégée Frankie to make more compliments, “Treat her with respect,” he adds. Romeo adds: “Don’t look at her breasts, nothing below the neck.” The second date gets off to a good start. Frankie pulls out Kristina’s chair and opens the champagne. “Are your legs aching?” he asks and Kristina replies: “No, why?” “Cos you’ve been running around in my head all day,” Frankie smiles, and they both laugh. At the end of the date Kristina reports to the diary room to give Big Brother her score. She says that Frankie had “good manners,” and was not talking about “whacking off,” so scores him 10 out of 10.

Housemates have been gathered on the sofa for the result of Frankie and Romeo’s task. Big Brother announces the scores and informs them that they have passed the task, and have won drinks for all the housemates to enjoy this evening.

Big Brother has gathered housemates to the living area for the result of tonight’s eviction. Natasha tells the housemates sitting near her that if she stays she will “snog Kirk.” Nicola misses the comment and Kirk repeats it. Nicola looks smug and quips “I can’t snog, I’m married boys.”

Earlier in the day, Natasha and Nicola made separate visits to the diary room. Natasha said: “I really don’t wanna go.” Nicola confessed: “I do feel I should be here, I wanna experience more.” Kirk had also visited the diary room and told Big Brother that Natasha was so “down to earth, funny, sweet and caring.” He hoped to see her again once he leaves the house. Natasha says that she felt like she was “on holiday with a big group of friends.” “Big Brother gave people the opportunity to know who I am, I’ve had a ball, and it can’t get any better than that.” Natasha is the second celebrity to leave the Big Brother house.

It’s been 48 minutes since Nicola survived the eviction. Georgia and the twins are in the garden gossiping about her. They agree that she talks with everyone “cos she wants to stay here.” Karissa says: “She’s not in our crew!” as Frankie walks into the garden. Nicola has gone to the diary room. She tells Big Brother that although she likes Natasha, “She shouldn’t have done what she done (sic).” Nicola says that if her husband cheated on her he would be “dead to me.” “I would definitely not be flirting with people if I was trying to win my husband back!” she adds.

It’s been 1 hour and 25 minutes since housemates began drinking. Denise heads in to the bedroom to find Michael. “Why do you keep going to bed at 6’ o clock?” she asks him. Michael quips: “If I’m being boring, why do you care?” She tells him that their fellow housemates think they’re upset with each other. Frankie and Georgia are in the garden. He tells her that she has to “chuck something,” Kirk’s way. Georgia giggles and tells him that Kirk has been “weird,” with her today. Kirk joins them and Frankie makes a swift exit. Georgia tells him how he has been towards her and he smiles adding: “I’m just being me.” Back in the bedroom, Denise tells Michael that he can always speak to her if he needs too “seeing as you’re going to have children with me,” she jokes. Michael laughs.

Some of the housemates are in the hot tub. Michael and Gareth are in the bedroom talking about the Big Brother experience. “I’ll definitely leave here having learnt something about myself,” Michael muses.

In the hot tub, some of the housemates are playing truth or dare. Natalie is asked if she had sexual thoughts about any of her housemates. She says that she has. Next, Natalie is dared to “tongue kiss” one of the twins. Natalie and Karissa share a kiss. Kirk asks Nicola if she would make a move on Frankie if she was single. She moves in as if to kiss Frankie and tells him that she would.

In the bedroom, Michael asks Gareth about his decision to come out. Gareth tells him that he had always rugby in his life even if he didn’t have a girlfriend but then fell “99% in love,” with a girl. The subject turns to children and Gareth says that he would have liked to be a father but it wasn’t to be. He tells Michael that he believes that if he did have kids “I would be in here today.”

Michael is applying a lot of hairspray to his hair before bed.
Meanwhile, the twins, Romeo and Georgia are talking about Nicola’s drunken antics in the hot tub. They mention that Nicola’s husband would be embarrassed and order Romeo outside to get her out of the hot tub and safely in bed.

Romeo and Georgia are on opposite sofas in the garden. He mentions how “cute” it is that one of her eyes is off centre. Georgia laughs and tells him that as a child she wore an eye-patch or glasses and had curly hair, “I looked like a pirate.” They laugh as Romeo tells her that as a kid, he had a big afro “like the Jackson 5.” He tells her that he has gradually got to know her and says she is “proper cool.” “You’re a gentleman,” Georgia tells him and Romeo comments, “I’m not perfect.” As they make their way toward the house Romeo asks her how she is getting on with Kirk. Georgia giggles. The show ends with him saying “He’s not your type?” and them walking back towards the house.