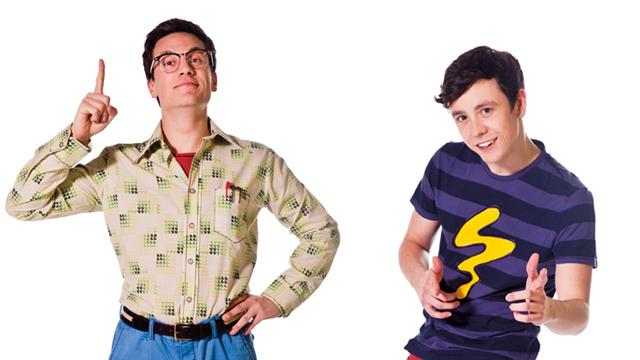 We got pretty excited when we found out the cast of Loserville: The Musical – it’s like someone read our teenage diary (if you can pretend we were well behaved enough to write one), picked out the names and cast them in a show to the tune of one of our favourite albums.

The show, penned by James Bourne (of Busted and Son Of Dork fame) and his writing partner Elliot Davis, boasts stars like Gareth Gates, Aaron Sidwell and Chris “Lil’ Chris” Hardman, and opens at the West Yorkshire Playhouse in Leeds later this month (running from 18 June – 14 July).

A musical mash-up about dating, binary and staying true to your dreams, the show takes you back to 1971, senior year. Michael, Lucas, Francis and Marvin are about to revolutionise the world when a new complication enters their life… girls. When the brilliantly clever and stunningly beautiful Holly arrives in town all of Michael’s dreams seem to be coming true, but arch nemesis Eddie has his sights on stealing Michael’s perfect girl and taking all the credit for his world changing ideas.

We sat down with Aaron and Chris to find out all about the show, but not before reminiscing with Aaron about the last time we interviewed him (which you can read here), and that tail.

How did you guys get involved with the show?
Chris: I got a call from my agent, who had been contacted by the show. They asked me to come in and audition, so I went in and auditioned – and that was a long time ago, over a year ago. I auditioned and then I got a call back ten months after that.
Aaron: It was the same for me. I just got a phone call from my agent, went along, met them a few times and it just sort of progressed from there. I was initially cast, along with Eliza (Hope Bennett, who plays Holly) for the West End, but then this place opened up.
Chris: That was the offer, for the West End, but as things went on it changed. So we’re starting at the West Yorkshire Playhouse, which is cool.

Introduce us to your characters.
Aaron: [Michael] is a genius, he’s an absolute genius. He invents computer communication. He’s a real outsider at school, he’s got a few friends but that’s it. Then a girl arrives at school who he falls in love with. He falls in love, she breaks his heart, it all comes good in the end. It’s a really happy story. My character is just a big genius, but he’s put down by everyone at school apart from Chris’ character and our two other friends in the show. He has the mentality that there’s nothing to lose, because he doesn’t really have much to lose anyway.
Chris: Francis is the best friend to Marvin, played by Dan Buckley. We’re a funny pair, we do silly things and Francis is a real dork. He’s not the brightest person and he hasn’t got many friends apart from Marvin or Lucas (played by Richard Lowe). He’s just a geek and he does stupid things. He thinks he’s quite in there with the ladies, he’s got a good memory for chat up lines, he writes them down and waits for a good opportunity to use them and shows off to his friends – everyone gets a bit bored of that and thinks he’s rubbish. He can’t really get any girls.

I feel bad asking this now, but do you have anything in common with your characters?
Aaron: We’re miles apart, we have nothing at all in common. He’s really clever, I’m not. He’s not very good with girls, I am [laughs]. There’s not really many similarities. I think the only thing that I can relate to with my character is that awkward teenager feeling, like when you meet a girl and it’s like ‘Do I take her hand? What if she doesn’t want me to?’ – all those kinds of things. With Michael, it’s amplified because he has no confidence. I can’t really relate to him, but I like that. Playing the complete opposite of myself is fun.
Chris: I think Francis is pretty ugly and I think that…
Aaron: You’re beautiful?
Chris: [laughing] No. He just says stupid things and people are like ‘Oh, Francis! Come on!’ – that’s a little bit like me, I can say stupid things sometimes and I am a bit of a geek sometimes, but not a massive geek, not as much of a geek as Francis.

What were you guys like at school? Cool? Nerdy?
Chris: I thought I was cool, but I really wasn’t cool. I had my own style – I didn’t really follow any fashions. I thought I was a trendsetter, but no one actually followed the trends I was setting.
Aww!
Aaron: I was a shit.
[laughs]
Aaron: I should have been expelled! I was horrible. I went to a private school and everybody at my school was very well behaved. I didn’t really want to be at school, I never liked school, because I knew from the age of five that I wanted to be an actor. School just seemed irrelevant to me, never mind how to add! I think I was more like Eddie (played by Gareth Gates) at school to be honest, a bit of a cock – luckily I’m not a cock any more. I didn’t take anything seriously, anything that wasn’t to do with theatre I didn’t take seriously.
And you turned out fine!
Aaron: It’s worked out well.
You should speak at schools! ‘You don’t really need to try…’
Chris: ‘You don’t need to go to school…’
[laughs]
Aaron: I had a teacher that hated me at school and he came and knocked at my door, he was doing the census in my area. He knocked at my door and asked what I was doing now, I was like ‘[casually] Just in the number one TV show in the country…’ But I did have an amazing headmaster, without whom I wouldn’t be here. He kept a lot of faith in me. But yeah, I was horrible, but I’m lovely now!

That was my next question, what are you like now? Cooler or more of a dork?
Chris: I don’t know, I couldn’t possibly mention… I think now, it doesn’t really matter to me whereas back then it did. I worried about if I was a nerd or a geek or whatever. By trying not to be one, I actually became a massive one. So now… I’m definitely not a jock, I don’t really do much sport any more, but I don’t really give it much thought.
Aaron: I’m just a dad really, I’m very sensible. Not at work, I’m by far the most immature I think, I’ll be the one making fart noises. In my home life I’m very settled down, I’ve got two little girls and I drive a dad car. I’m not cool any more, I drive a Fiat Punto Grande. It used to be a Ford Focus.

How are the rehearsals going?
Aaron: Awesome, we’re absolutely rattling through it. We’ve got just over three weeks left and it’s pretty much completely booked. It just gives us time to run it and clean it and work on areas that aren’t working.
Chris: If I’ve learned anything, it’s what blocking is. That’s good for me. Now I know some of the theatre terms which is great. I came in not knowing anything about theatre and now I feel like a semi-pro.

Why should people see the show?
Aaron: Because there isn’t a single show that is like this. It has elements of a lot of other shows but there isn’t another show that has the sci-fi, the characters – I don’t know any other show that has characters that you care about as much. You care about every single character in the show, bar one – not Gareth’s character [Eddie], no one cares about him, he’s the most evil character in the show. It appeals to our age, parents will love it because it dates back to the 70s when they were teenagers. It’s about teenagers, it’s about school. The music is very now and vibrant, it’s just a great, great show, the choreography is insane – there isn’t a single show like it.

I’ve got two questions that will determine if you’re cool or nerdy. Who won the last World Cup?
Aaron: Spain.
Yes. And do you know how many times Buffy died in the TV series?
Chris: Three?
Aaron: Did she die?
Two… but that makes you cool!