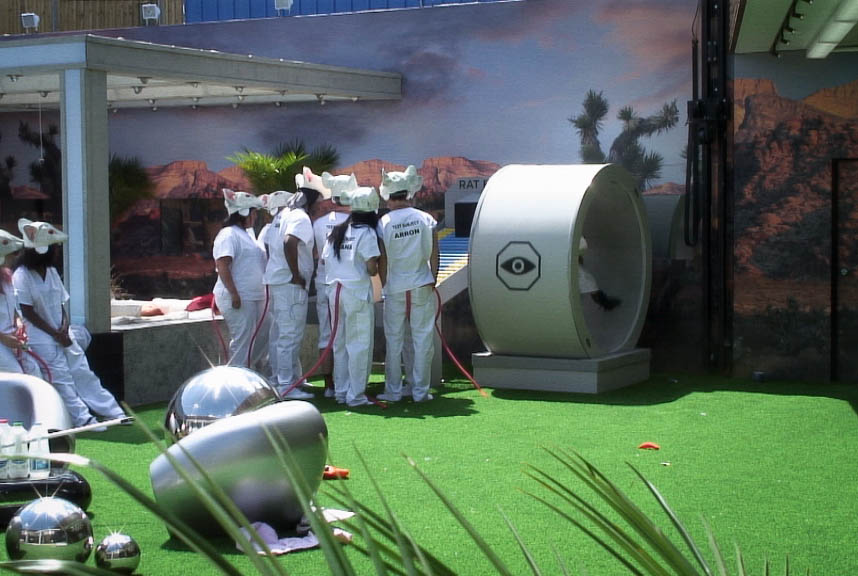 Day 15 in the Big Brother house…

Overnight the house has turned into ‘Big Brother Laboratories’.

Over two days, the housemates have to earn their food so Big Brother has emptied all the cupboards. Upon realising the cupboards are bare, Luke S says: ‘F****rs, they’ve taken all the food.’

Big Brother asks the three most intelligent housemates to go to the Diary Room, and the group decide that they are: Benedict, Luke A and Lydia.

In the Diary Room, Benedict, Luke A and Lydia are told that for this week’s shopping task, Big Brother is opening a scientific research division, ‘Big Brother Laboratories’ and they are the ‘scientists’.

The other housemates have become their ‘lab rats’ and over the next two days they will conduct a series of experiments on them.

The scientists will draw up hypotheses on the outcome of each experiment.

Benedict thinks it’s going to be ‘fun’ to experiment on them.

Scott tells Becky that he’s annoyed he wasn’t chosen as one of the three most intelligent housemates. He moans: ‘I just can’t believe people think I’m stupid…I’m going to have to stop being an idiot.’

The scientists and lab rats are gathered in the living area and told that if they pass the task they will receive a premium £840 shopping budget.

Will the housemates work out how to always earn nice food?

The scientists discuss and hypothesise that no, they won’t work it out, and they watch from their private laboratory.

The lab rats take it in turns, and win a mixture of good and bad food.

Luke A asks Benedict if he’s enjoying watching the task. Benedict says he’d ‘like them to suffer a bit more.’

Task one is over and housemates didn’t guess the twist, so the scientists’ hypothesis was correct. If scientists get the majority of their hypotheses correct, Housemates will pass the shopping task.

Lauren doesn’t like any of the food that they’ve won. She really wants a bacon sandwich and complains: ‘I’m so hungry.’ Later she says; ‘I don’t want to make a fuss because that’s why people have nominated me.’

In the bedroom, Conor and Luke S are talking about Lydia and the fact it’s her birthday the following day. Luke S says: ‘She’ll make tomorrow all about her.’

Caroline is commenting on how people are behaving during the task: ‘Becky is being so annoying.’

In the kitchen, Becky says to Lauren: ‘If you do keep moaning it isn’t going to make matters any better.’

Caroline, Scott and Caroline are talking about the scientists.

Benedict is in the Diary Room talking about his fellow housemates.

He says: ‘The problem is, and I think one we’re starting to develop in the house, is that most people just want to fit in and be a sheep…I don’t blame them but unless you step out of that mould, you’re never going to be more intelligent.’

Of Sara he says: ‘People like Sara, I don’t see any depth to her…she’s a sheep.’

About Ashleigh, he says: ‘She’s a sheep from the herd of Essex sheep.’

Time for another experiment, called ‘Eyes on the Prize’.

The lab rats are fitted with special digital goggles which measure where their eyes are looking. If they can keep their eyes on the prize, they will win it, but they must not be tempted to look at the various distractions which enter the room.

Before each lab rat takes up their challenge, the scientists must make a hypothesis as to whether the lab rat will take their eyes off the prize.

Shievonne is called to the large task room. She says: ‘I’m scared.’ Will Shievonne take her eyes off the prize, a takeaway?

Her distraction is a seven-stone Burmese python.

Scott’s prize is a party for one, and Lydia doesn’t think Scott will take his eyes off the prize.

His distraction is a rowdy bunch of super fans.

Amongst the task results, Shievonne, Scott and Luke S all avoided temptation and so won their prizes.

Ashleigh is called to the Large Task Room, where her prize is to spend time with her pet dog.

Lydia decides that Ashleigh will take her eyes off the prize.

Ashleigh’s distraction is ‘Justin Bieber’ but she keeps her eyes on the prize, meaning the scientists have so far made one incorrect hypothesis.

Caroline is talking to Shievonne in the bathroom, saying she finds Becky annoying.

Meanwhile, Lydia is in the bedroom, saying she finds Shievonne difficult to live with.

Things seem to be getting to Lauren. Luke A asks how she feels about being up for eviction. Lauren says: ‘Everyone is still avoiding me; I’m just finding it really hard.’

Outside, Ashleigh is talking to Shievonne about Luke S and sex.

Ashleigh muses: ‘Because I’m spending all day with him, I know him, it ain’t like ‘Oh we’ve gone for dinner’ and then we’ve gone for another date two weeks later, we’re living together right now. Do we? (have sex)…I’m definitely not doing it.’

Scott is in the Diary Room enjoying his prize of a party for one.

Meanwhile in the Living Area, the scientists are setting their next experiment. They will give the lab rats except Scott earpieces through which the scientists will give instructions. The experiment will test conformity – will Scott go along with what the other lab rats are doing, no matter how odd?

The scientists hypothesise that he will conform.

BB hosts a pretend hypnosis session in which Caroline pretends she has been hypnotised to believe she has ants in her pants, Deana pretends to believe she is naked, and Conor’s fake hypnosis makes him believe he is riding the winner in the Grand National.

When it is Scott’s turn, he conforms and makes a sheep noise as requested.

Some of the other housemates are enjoying a drinking game, whilst out in the garden others (Lydia, Luke A, Benedict and Deana) aren’t feeling a part of things.

Lydia says: ‘I don’t feel like its fun anymore, we’re just on the outside of everything.’

As they observe the drinking game, they comment on how they feel sorry for Lauren trying to join in with the other girls when they don’t like her.

While wearing rat heads as part of their costumes, Luke S and Ashleigh kiss.

For the next task, Big Brother is going to find out if it’s possible to increase the amount of effort the housemates put in to the tasks using subliminal messaging.

The scientists will pick one housemate who will spend the night in segregation.

While they sleep, Big Brother will play them positive statements which will hopefully sink into the lab rat’s brain, and when they wake up will have an improved positive attitude to tasks and put in twice the effort that they did before.

In the smoking area, Benedict and Lauren are talking about Caroline.

Lauren says that Caroline has taken a dislike to both of them.

Benedict adds: ‘She likes me physically, but apart from that she dislikes me.’

Talking about why he was up for eviction, Lauren tells Benedict: ‘It’s not they don’t like you it’s they don’t understand you.’

Caroline is escorted to the testing lab for her sleep experiment.

Caroline is in bed in the segregation room, trying to block out the positive messages being played into the room.

A wound-up Caroline says: ‘This is planning on going on for nine hours?’