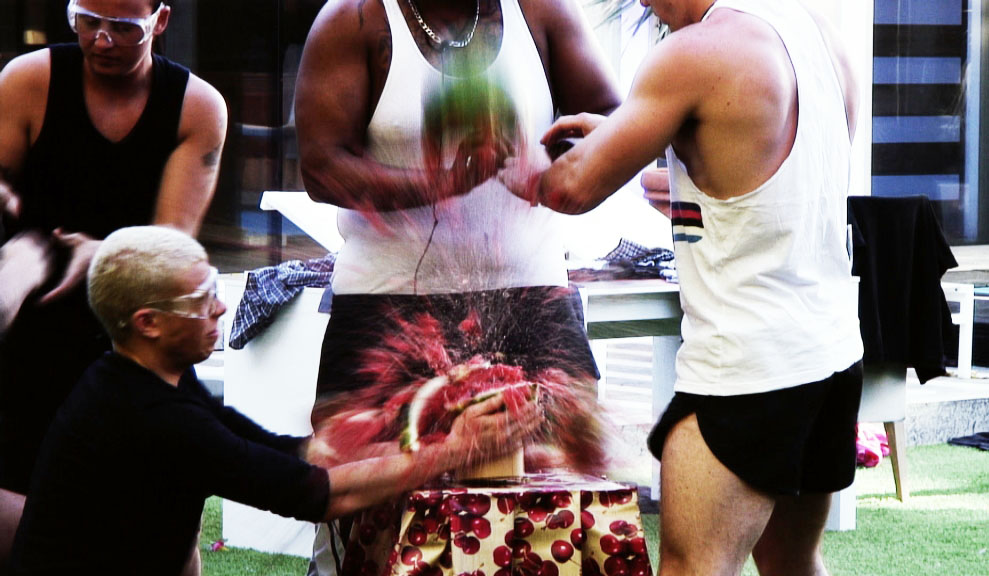 Day 49 in the Big Brother house…

9:45am
It’s is a bright sunny day and today, the 10 remaining housemates will nominate for the seventh time. However, Big Brother is throwing in a twist. Every housemate who receives one of more nomination will face the public vote. Caroline comes to the dairy room and describes Monday as the most “tedious” day of the week. “Obviously Luke A will nominate me,” she guesses and tells Big Brother that there will be some “tactical nominations,” going on. She explains: “Luke S probably finds Scott more unbearable to live with but will nominate Luke A because Scott won’t receive many nominations.” She also claims that Luke S was being tactical when he failed to nominate Adam during the face-to-face nominations, “Even though Adam is his least favourite person.” Caroline admits that she is lucky to have lasted so long in the house and would be fine if she were to leave on Friday.
11:14pm
Conor is in the bathroom preparing Scott for a day in the sun by spraying him with sun cream. Some of the housemates are in the garden sunbathing. Becky’s sun bed collapses and they all giggle. Unbeknownst to the housemates, this week there is a twist to the nominations. Each housemate that receives one nomination or more will face the public vote this week. Adam is the first housemate to nominate and names Caroline and Sara. Next up is Becky who nominates Luke A and Deana.
11:41am
Conor is hatching a plan in the garden and decides to try and fry an egg on the plastic garden table. who receives one or more nomination will face the public vote. Sara is the next housemate to nominate and names Luke S and Ashleigh. Some of the housemates are in the garden as Conor checks on the progress of his egg experiment. “You need to use a magnifying glass!” suggests Ashleigh.
12:18pm
Luke A is the fourth housemate to nominate and names Caroline and Conor and Ashleigh nominates Luke A and Deana. Adam asks Conor the question on everyone’s mind, “Has if fried yet?” Conor says it hasn’t. Ashleigh joins Scott and Becky for a bitch about Sara. The all agree that Sara never cooks and Becky adds: “She hangs around the kitchen waiting for someone to cook so that she can have some!” “She’s like Deana,” adds Ashleigh. The talk turns to Deana and Becky says that she didn’t like to watch Deana dance when they were treated to music in the house, “She watches the cameras,” she adds. “She can’t get her body out but she can dance like that!” Ashleigh snaps.

Luke A is the next housemate to nominate and names Caroline and Conor. Ashleigh nominates Luke A and Deana. Caroline is called to nominate and names Adam and Luke A. Luke S nominates Adam and Deana.
2:36pm
Conor and Luke S are taking Becky’s fitness regime into their own hands. Becky is lying at the side of the pool and they gently roll her in. She explains that she enjoys Zumba “and s**t like that,” but doesn’t like normal exercise. Conor and Luke S instruct Becky through some water aerobics exercises. Caroline is watching from the living area and scoffs: “Why is Becky doing water aerobics, she doesn’t even like exercise?” “She doing it for the camera,” quips Deana. Becky continues her pool workout but looses her top a few times but laughs along with Luke S and Conor.

3:10pm
It’s been over three hours since Conor tried to cook an egg in the garden. Luke S checks on its progress. “The yoke has congealed,” he announces. Deana is the next housemate to nominate and names Conor and Caroline; Conor nominates Deana and Sara. Scott is the next housemate to nominate and keeps Big Brother waiting while he applies “a bit of colour” to his face. He nominates Luke S and Deana. Having received one nomination or more housemates Adam, Ashleigh, Caroline, Conor, Deana, Luke S, Luke A and Sara will all face the public vote to save. Becky and Scott receive no nominations and are therefore safe for another week.

7:14pm
For today’s task, housemates will compete in a fruit based challenge, boys verses girls. The aim of the game is to make their melon explode before the other team by wrapping rubber bands around its centre. Luke S gives a running commentary as the boys launch into the task: “The girls are all over the place, they don’t even know what day it is.” After 5 minutes and 8 seconds the boys’ melon bursts. As winners of the task they will be rewarded with drinks later.

7:58pm
Earlier today housemates nominated for the seventh time, but this time there was a twist involved. Each housemate who received one or more nominations will face the public vote. Housemates have been gathered on the sofa for the result of this week’s nominations. Becky and Scott are the only housemates not to face the public vote. “Are you actually joking, I’ve been really bad though?” shouts Becky when all the names have been announced. “I think it’s gonna be a double,” Conor says. Luke A and Adam are at the smoking area and are surprised that Becky has not been nominated. “Conor kept to his word,” quips Luke A. Deana has joined them. “God helped us there, it’s a good thing right?” she asks. Sara comes into the garden and tells them that she is fine about being up: “I didn’t think you would be Adam, you came as a shock,” she says. “I’m baffled how Becky isn’t up,” Adam tells them.

Scott tells Caroline that he is surprised that Luke A didn’t nominate Becky and Caroline raises her tactical nomination argument.

8:36pm
Caroline is in the pool and giggles while telling some of her housemates: “According to Friday night’s reception I’m the least popular” in the house. Some of the housemates are at the sofas. Sara asks if they are alright following Big Brother’s revelations. Most of them are fine but Adam feels otherwise. “I’ve been up three times,” Conor rants to him. Adam explains that he is entitled to feel how he does, “I’ll grow a set of balls but right now it’s not a good feeling.” “Whatever happens, happens,” Conor retorts. Scott is in the garden and tells housemates in mock shock: “I can’t believe Adam,” and they all laugh.

8:56pm
Luke A still has nominations on his mind and speculates how the public have viewed Luke S: “The public aren’t stupid, when he did that calendar shoot, people will see the funny side,” he muses. In the garden Luke S is showing off his funny side. Becky and Ashleigh are at the sofas and Luke S has revealed his testicle to them to show them. “I have never seen a bigger bollock in my whole life,” Becky exclaims and calls Scott over to have a look. Luke S explains: “It’s full of veins.” Scott shields his eyes and protests: “No, I can’t look.” Adam has also come to view the spectacle, “Oh my God!” he grins.

10:01pm
Luke S has come to the diary room having been put up for eviction for the first time. He confesses to feeling “a little nervous,” as a “newbie” to possible eviction. He admits that he would like to be in the final preferably with Ashleigh, so they could share the experience. “I don’t know how I’m perceived but I’m fully aware of how I come across on first impressions,” he adds. Ashleigh is in the shower and Becky asks her why she isn’t shielding the view of herself. “Fannies, vaginas, tits, balls, we’ve all got ‘em!” she yells. “What if you stay and Luke (S) goes,” Becky asks. Ashleigh says that she wouldn’t be upset as she will see him in two weeks. “I’d be like, ‘See you outside sunny Jim’.” she mocks.

10:23pm
Scott has come into the diary room and Big Brother asks him how it feels to have evaded being nominated. “It’s nice I realise I haven’t got any real enemies.” He mentions Adam’s reaction then mocks him while adopting an American accent. “No, I’m not okay at all,” he mocks.

Caroline and Ashleigh are chatting and Caroline grins: “We’ll have the best week cos we don’t give a s**t.” The conversation turns to Adam and Caroline tell Ashleigh that viewers will like him. “He’s different, cool, he’s been through a lot, changing his life around,” and thinks people will like his “storyline.” She says that although Adam is nice, the public don’t have to live with his “s**t marks,” but would prefer to live with him as opposed to Luke A. “He’s a nice guy, just really annoying,” she adds. “He wants it so much,” Ashleigh adds.

Deana, Adam and Luke A are in the garden. Luke A asks if they will be having any “soldier talk” tonight. “I’m a Private, who’s the Major or Brigadier?” he grins. “I don’t think we should do that,” scolds Deana.

12:01am
Caroline has come to the diary room and tells Big Brother: “I’m genuinely so pleased we’re all up.” She says that she was amused by Adam’s reaction to his nomination and is “amazed” to have lasted so long in the house: “Considering I can turn into super bitch.” She grins while announcing: “I’ve definitely ruined my life,” and reveals that she plans to sabotage forthcoming shopping tasks by spending the budget on “5000 jars of Nutella.”

Adam and Luke A are at the smoking area. Luke A brands most of the housemates as “Evil, attention seeking, arrogant, a***holes!” “My friends would be 50/50 with my performance,” Adam remarks. Luke A admits: “I’d hate to be here without you guys,” but tells Adam that he “blends in better,” with the other housemates. “I could be a lone soldier but I’d prefer to have you here.” Caroline is on the decking. “Do you think she’ll go?” Adam asks. “Deffo,” Luke A replies.